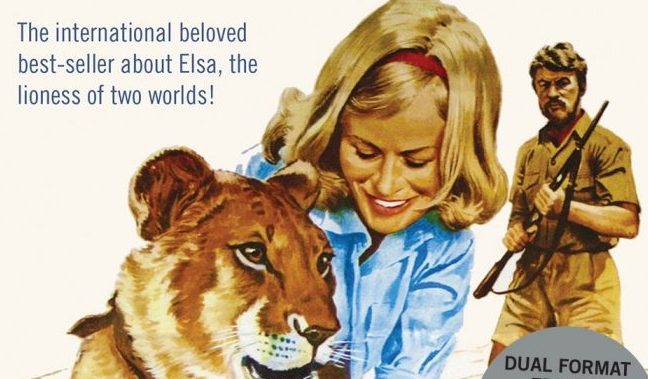 Opening with John Barry’s sweeping score across the Kenyan grasslands, Born Free is a classic family film, popular to families of a particular age and perhaps has less appeal now than it did when I was growing up (when it was regularly shown on TV). However, what the extras on the disc highlight are how relevant this film still is and the important conservation message within.

Born Free is based off the true story of George and Joy Adamson. George (Bill Travers) is a British (colonial) gamekeeper who looks after a reservation in Kenya. He and Joy (Virginia McKenna) live in a bungalow where they live an idyllic life. George is forced to kill a male lion and female lioness who it was reported have been killing locals. He discovers that the lion pride have three baby cubs. George takes them back to the bungalow to Joy who is happy to help look after them. Despite the reservations of George’s boss, John Kendall (Geoffrey Keen) they raise the lion cubs as their own pets. As they get bigger naturally they become more of a handful and are faced with the tough decision of sending them off to Rotterdam Zoo. However, Joy is depressed and saddened by this prospect and George reluctantly allows her to keep her favourite lioness, named Elsa. Elsa becomes tame, even as a fully grown lioness. When George and Joy have to take their official leave and are ordered back to Britain, George and Joy face an unprecedented problem and that is to make Elsa wild, something that has never been done before.

Born Free is based off Joy Adamson’s own book, published in 1960. The film is a perfect family film. However, while the story is accurate but the surrounding story is very different. It presents a very British colonial image of the story, but the true story is quite different. Joy Adamson was Silesian, born in the German part of Czechoslovakia and George was her third husband. For many years he lived in Kenya as a games conservationist where he met Joy and married her in 1944. The story as it is, while in all likelihood romaticised it never the less is accurate. The time frame in the film does feel longer but Elsa the lion was only 6-years-old when she died. Her cubs were blamed for a series of killings of local farmers, but the Adamsons were able to track the lions and transfer them to a different reservation. Sadly, long after this film was made, George and Joy Adamson were both murdered – George was killed by poachers in 1989 and the following year Joy was murdered under mysterious circumstances. A follow-up book to ‘Born Free’ was written by Joy, ‘Living Free’ that was made into a film in 1972 and starred Nigel Davenport and Susan Hampshire as the Adamsons and Geoffrey Keen, also known as an occasional M in the James Bond films returns as John Kendall.

The Eureka! release does justice to the scale and scope of the film, shown in the original 16:9 – 2.35:1 aspect ratio. Opening and closing with John Barry’s sweeping score and ending with Matt Monro’s rendition of the song accompanied by Kenneth Talbot’s camerawork this is a good looking film and one of the key family films of the sixties. However, the release of the film highlights a much more important relevance to the film. All the extras are related to the legacy, the Born Free Foundation which is set to rehabilitate lions and take them away from areas of threat or captivity and improve their lot. The foundation was founded in 1984 and included on the disc are promotional films and the hard work they do.