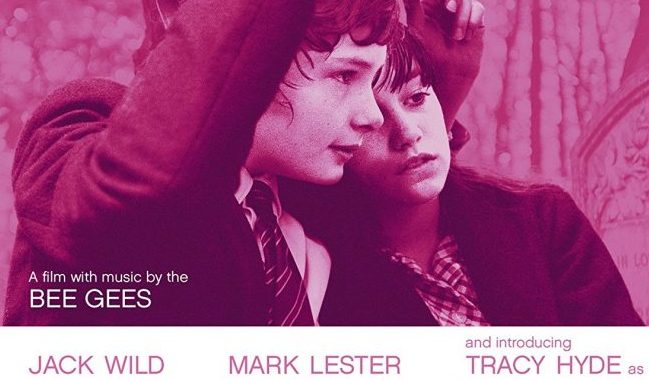 ‘Coming of age’ drama sounds something of a cliche and they aim to be relevant to an audience who can relate to the different emotions taking place or tap into our own memories of growing up. Yes, the film is of its time but as the trailer for the film says (not included on the disc unfortunately) this story is for any age when young people experience their first love. I’m sure this is something we can all relate to. The kids in the school do have a mixture of natural innocence and wildness to them; reminiscent to Casper’s school buddies in Ken Loach’s Kes (1969) and they all, despite the two boy leads being household names even at the time the film was made, all the young people were of course non-professional actors.

The film opens with shots of the South London skyline (from the south) with the credits played to the beautiful Bee Gees song, ‘Morning of My Life’. The next shots show a group of boys in a Boy’s Brigade marching band in Battersea. In these opening shots we meet two of the stars of the film, Mark Lester and Jack Wild as Daniel Latimer and Ornshaw respectively. Of course both these actors were reeling from the success of starring in Oliver! (1968) and agreed to star in the film for free in exchange for a percentage of the profits; there was very much an appetite to reunite them and their obvious chemistry. Undoubtedly without them the film would have had any impact. The two boys, both 12-years-old attend a school in Hammersmith. There, Latimer is attracted to a girl called Melody (newcomer Tracy Hyde). The pair fumble into a relationship together and fall in love wanting to marry each other much to Ornshaw’s jealous chagrin and the parents and teachers trying to prevent them.

On paper the film has little in the way of a plot. The scriptwriter and producer were both newcomers marking this as the first film for both. They both went on to become big names, while the director, Waris Hussein was also a relative newcomer. The name of the producer, who also cconceived the film was David Puttnam. He wanted to make a film about first love at school based off his own experiences and reflections at school (his first love became his wife). He also wanted the plot to revolve around several songs by the Bee Gees after meeting the Bee Gees manager, Robert Stigwood. Unusual that the film should build it’s plot around a selection of songs rather than the other way round the film never the less became a huge influence on Wes Anderson and the way he uses music in his films. Puttnam then employed his friend, Alan Parker to write the script. At the time Parker was an advertising exec and wrote the script around the songs and both their experiences growing up in London as per his brief by Puttnam. Ironic then that Lester and Wild were the biggest names on the film. The songs really do work well in the film, the best of all the scene in which Melody is going through Kennington with her recently acquired goldfish played to the Bee Gees ‘Melody Fair’.

Of course there are precedents here. François Truffaut’s Les Quatre-Cent Coups (1959) was a fine example about a rebellious schoolboy who spends his time wandering the streets of Paris to escape school and his bickering parents, while 10 years later Lindsay Anderson’s If… (1968) is centered around (slightly older) school kids who rebel and kill their teachers in the name of revolution. This doesn’t happen with Melody, but there is an anarchic ending where the parents and the teachers try to stop Daniel and Melody from running off to marry, leading all the kids to fight back. Originally Puttnam wanted to set the film in the 1950s as a period piece but the budget wouldn’t allow this. He would get to do this a couple of years later with That’ll be the Day (1973) starring David Essex. Of course now, with the distance of time it has become exactly that, a period piece. Years later Puttnam was the executive producer on P’Tang, Yang Kipperbang (1982) about first love at a 1950s suburban school.

This is the perfect charming coming of age drama. Another element is Tracy Hyde as Melody. She was an unknown and did little else after this film. Never the less, as Puttnam states on an extra on the disc Hyde has the perfect innocent look of a maturing 12-year-old, was natural and beautful to shoot at any angle. The picture quality on the film has great depth and is sharp, bringing out the camerawork of the London streets by Peter Suschitzky well. There are a host of familiar films in lesser roles in the film who were better known on TV in the 70s including James Cossins as the reverend headmaster (often a character actor on British TV and in sitcoms), Ken Jones (familiar from such TV sitcoms as ‘The Squirrels’), Sheila Strafel as Daniel’s mother and Kate Williams as Melody’s mother (a familiar face from the controversial ‘Love Thy Neighbour’). The film disappointed at the box-office in the UK and the US but became a huge success in Japan. Melody does have a cult status but is now getting a much deserved release by Studiocanal.

The only extras on the disc, as well as a stills gallery are interviews with messrs Hussein, Puttnam and Parker. It would have benefitted from the trailer and it would have been great to have a selection of separate Bee Gees songs or a featurette on the music.