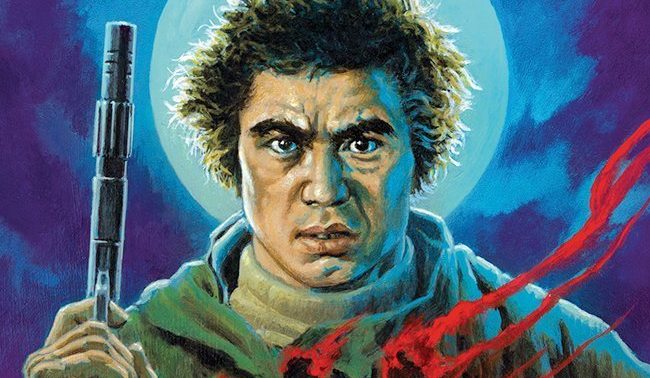 Part action movie, part martial-arts film, part horror film and even has elements of a B version of a James Bond film to it, Wolf Guy (1975), the latest release from Arrow Video is all of these things but more importantly is the most arthouse of all werewolf films. It also has a very 70s aesthetic to it – a funky score, lots of crimson blood and the exaggurated sounds of kicks and punches as in any martial arts film. Much of the plot is style over coherence as it opens with a chase through Tokyo streets, the appearance of a tiger that turns invisible (displaying shades of Cat People, 1942 here) and a man who is brutally mauled to death. We are then introduced to the Wolf Guy himself, Kimu Inugami (played by Japan’s foremost action star, Shin’ichi ‘Sonny’ Chiba). He is the last known survivor of a clan of Inugumi, a tribe of werewolves and is searching for his identity. The werewolf in this film is different to the normal werewolf – he is a good guy, very much like a Wolverine type of character from the Marvel comics rather than the killer beside himself of the traditional Hollywood werewolf. Wolf Guy becomes embroiled in all sorts of adventures such as with crooked politicians, strippers and a shadowy organisation that tries to take his blood and mix it with human blood to create an army of werewolves (it fails though as the human-werewolves die from blood poisoning).

The film is a hard plot to follow as it moves from one seemingly unconnected situation to another. It is directed by Kazuhiko Yamaguchi, a genre director who mostly made action films. This is the first time that Wolf Guy has been seen outside of its native Japan and on an an extra on the disc, Yamaguchi explains that although he had worked with Chiba in the past the actor took his part very seriously. He claimed not to have seen the classic Universal or Hammer werewolf incarnations and rather brought a freshness to the role. There is also a host of well known Toei support actors in the film. Added to the complexity of the plot there is the usual blood and gore of 1970s horror films with red paint and tomato ketchup liberally thrown around. In one scene Inugami’s stomach is cut open on the operating table while he is conscious in a scene filmed as though this was an hallucinogenic trip. After he is cut open his intestines re-enter his body and his body seals again – another scene that is similar to Wolverine, especially in The Wolverine (2013).

Little is made of the origins of Wolf Guy on the extras on the disc. Like many-a Japanese film Wolf Guy is based off a Manga story. Written in 1970 with other versions and sequels also written in the 21st century the graphic novel has a popular following in Japan and therefore an extra about this would have given some necessary context. There are three main extras on the disc – interviews with Chiba, Yamaguchi and producer, Tatsu Yoshida. It is a crazy film and will leave the viewer confused, somewhat delighted and perhaps bemused. Never the less Arrow Video are again to be applauded for having the foresight to release the film – something that even Yamaguchi was scratching his head to understand on an interview, but was pleased none the less.