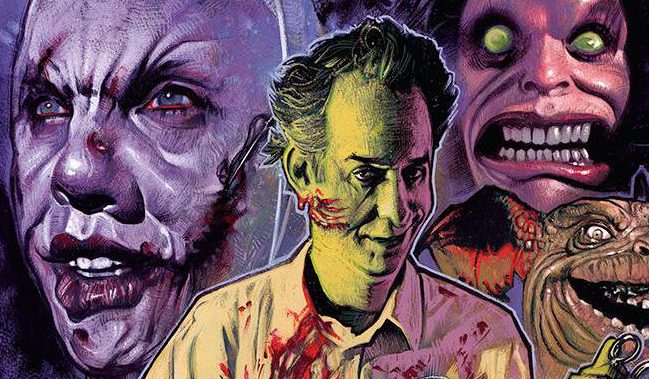 There have been several films made about filmmakers and their obsession with filmmaking, blurring the boundary between obsession to their craft and blurring the distinction between reality and illusory: think of Tim Robbins as the messed up scriptwriter in Robert Altman’s The Player (1992), Donald Sutherland’s wandering mind as the film director in Alex in Wonderland (1970), the dreamer film director in Fellini’s 8½ (1959), Karl Böhm’s obsessive and perverse serial killer cinematographer in Michael Powell’s Peeping Tom (also 1959) and perhaps more relevant the blurring of fantasy and reality in Wes Craven’s New Nightmare (1994). None are as bizarre and twisted as the Swedish film Evil Ed (1995), made by Anders Jacobsson and Göran Lundström, part of a group of amateur filmmakers who loved horror films. That is evidenced by the posters for horror films that appear throughout the film.

The main character in the film is Edward Tor Swenson (Johan Rudebeck) who has been hired as the editor for the ‘Loose Limbs’ horror film franchise. The problem is that this meek and mild man is no fan of horror films but sees this as an opportunity to increase his profile. Under pressure to complete the editing by director Sam Campbell, Edward slowly starts to become affected by all the horrific gory imagery he is viewing and slowly starts to hallucinate and go mad. He sees severed limbs and a gremlin-like creature in his fridge along with other gory imagery. Anyone who comes-a knocking on his door he brutally murders and cuts up going full on crazy. Even his loving girlfriend is chased around by the by now demented Edward.

Of course the overriding influence on this film is Sam Raimi’s The Evil Dead (1982) and even it’s follow-up, Evil Dead II (1987), demonstrated by the films title as it parodies Raimi’s film. Even the name of the seedy film director who hired the editor to cut his film references The Evil Dead, Sam (Raimi) (Bruce) Campbell. This love song to horror films is more than this. As a Swedish film it is also cocking a snook at Swedish censorship and its rules on gore and nudity giving the finger to the censors as they include plenty of both in the film; even though only four screens in the country showed the film when it was released. Evil Ed had the last laugh though as it was eventually sold worldwide. This is also a Swedish film that was filmed with the actors mouthing the words in English but dubbed by English speakers, making the film look and sound even more like a ‘B’ movie.

The film is cheap and amateurish in every way that has been given a big make-over here with new scenes added (although the famed girl raped by a beaver scene was allegedly cut and destroyed – if it existed at all. It is mentioned as a scene in the film Swenson is cutting). There is, of course, an emphasis on the gore and creatures with the ‘gremlin-ghoulie’ type creature in the fridge a rubberised standout. There are plenty of extras on the disc, expected given that this is an Arrow Video release including director/producers/writers Anders Jacobsson and Göran Lundström mostly giggling their way through the introduction and plenty of Making Of and make-up extras. Previously rare to see, a must for any fan of gore movies, even if it falls short of art or quality.