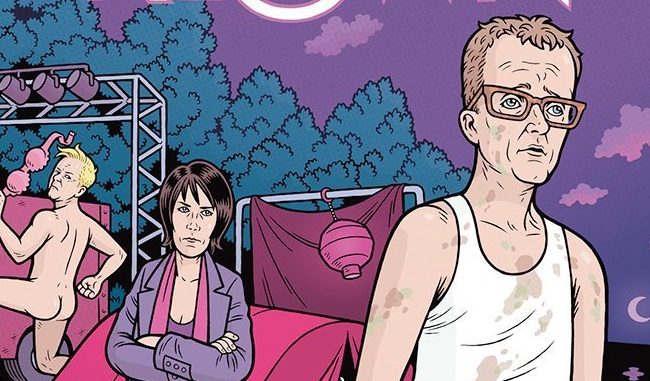 The USA is not the only country that has a market cornered in gross out comedy. The Danes can be bloody funny too. Think the Farrelly Brothers meets Stephen Merchant’s character in ‘Hello Ladies’ and Todd Solondz thrown in for good measure (the newly comissioned sleeve art by Danny Hellman resembles the poster to Solondz’s Happiness, 1998) and you would be on the right track as to what you have in store. Yet Klown (2010) makes a Farrelly Brothers offering look like a family film. Klown was originally a TV sitcom written by the two main protagonists in the film, Frank Hvam and Casper Christensen. The film proved a success in Scandanavia and is not afraid to deal with controversial subjects.

The main character is Frank (most of the cast use their real names in the film), the bespectacled and baseball cap wearing boyfriend to Mia. She knows he’s a klutz and most of the times she just rolls her eyes. When she learns that she’s pregnant she is concerned that Frank will not make an able parent and as a result she contemplates an abortion. Frank is always misreading signals. While lying in bed with Mia she tells him she wants to give Frank a treat. He thinks its his lucky day and prepares for a blow-job but instead she plans toasted teacakes in bed. So the tone is set. Frank and his best friend, Casper are planning their camping trip and canoeing down the river on what Casper is intending as a ‘tour de pussy’ where this man-child is excited at the prospect of screwing his way through the trip and ending up at a notorious brothel. However, Frank is concerned that Mia will leave him unless he can prove he can be good father (Mia is further disappointed when burglars break in and Frank flees leaving behind his 12-year-old nephew Bo who is staying with them, left to the mercy of the burglars). He decides to kidnap Bo, his 12-year-old nephew to prove he can be trusted with a child and as a parent. This is received with anger by Casper which threatens to ruin his plans on the ‘tour de pussy’ and all the drinking and whoring that this entails. The results are not only taboo, they are uncomortably hilarious.

Klown breaks all kinds of safeguarding taboos as the child is humiliated on the size of his penis (the less said on this the better) and in another act on a mini-golf course Frank pulls down the trousers of a 13-year-old for humiliating Bo on his small penis. Casper also tries to bed teenage girls on a college camping trip. You think that’s low? The film goes even further. In one gag his friends advise Frank to give his girlfriend Mia a pearl necklace so she knows he loves her, and no I don’t mean the type from Tiffanys. He ends up ‘delivering’ the pearl necklace to his mother-in-law while she is sleeping in his bed. To remind us of this she wears an eye patch for the remainder of the film. This is not giving too much as there are many other treats of this level of outrage throughout the film.