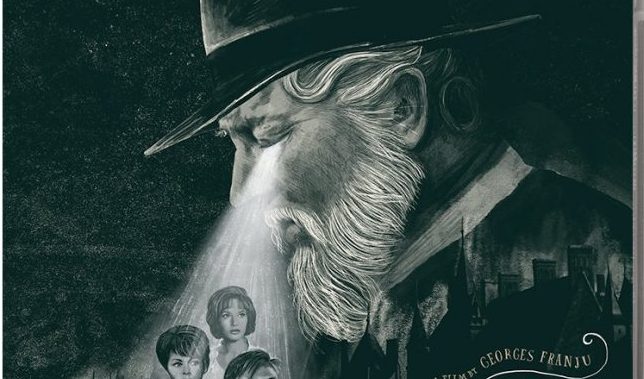 Spotlight on a Murderer (1961) Blu-ray Review

In 1959 George Franju made his second film, the poetic terror film (not a horror film as Franju was keen to state), Eyes Without a Face (original title: Les yeux sans visage). The film was well received and demonstrated the poetic vision for this suspense film that was to the director’s taste and style. Franju was most assuredly not one of the New Wave directors of Jean-Luc Godard or Francois Truffaut but did follow one of the truly great terror films of the 1950s to come out of Europe, Les Diaboliques (1955). In 1961 Franju made his third film, Spotlight on a Murderer. While this film is much less well known than Eyes Without a Face, Franju makes his film in the same poetic style as he had with his previous film.

In the opening shots we see the Comte Hervé de Kerloquen (Pierre Brasseur) dressed in the tabard of a Maltese knight. Terminally ill, he contemplates death and a short while later disappears, hiding his own body merely to annoy his heirs. Some months laters his family gather at the grand Kerloquen château for the reading of the will. However, the executor of the will informs the family that as no body has been found they will have to wait five years for the Count to be pronounced legally dead. Needless to say the family members are unhappy with this, accutely aware that at the very least the Count’s money is needed to upkeep the chateau and the estate. They spend their time at the château searching for his body. Jealousy and suspicion of each other arises when they decide to stage a play on the grounds of the château (whats called a son et lumiere show), telling of the story of an ancient ancestor at the château of madness and suicide. Suddenely a series of deaths and strange happenings start to take place that are made to look like accidents.

This is a good old fashioned ‘Cat and the Canary’ or ‘And There Were None’ type of gothic suspenser with the director’s own unique poetic telling. It was mostly shot on location at a grand châteu, the Château de Goulaine in the Loire Valley. Franju brought with him some of the cast from Eyes Without a Face as well as writers Pierre Boileau and Thomas Narcejac (who had also written the aforementioned Les Diaboliques) while it was atmospherically shot in noirish black and white by Marcel Fradetal. There is also a nice waltzy score by Maurice Jarre. The main actor in the film is the classical actor Brasseur who only appears very briefly in the film as the Count but whose presence permeates the film. Other actors include the beautiful prolific German actress Marianne Koch (who appeared with Clint Eastwood in the spaghetti western classic A Fistful of Dollars, 1964), a young Jean-Louis Trintignant and the stunning Dany Saval. For those, like myself who were not familiar with this particular film it is an interesting suspenser with a different approach to an unoriginal story idea. It is also reminiscent of the lower budget Roger Corman gothic horror, Dementia 13 (1963) which is perhaps better known as the directorial debut for Francis Ford Coppola.

The most signifanct extra on the disc is an almost half-hour 1960 documentary, ‘Le Courrier du Cinema’ filmed during the making of the film that has a rare interview with Franju (who is flattered by the interview reminding him of his poetic style of filmmaking) along with the rest of the cast and crew.