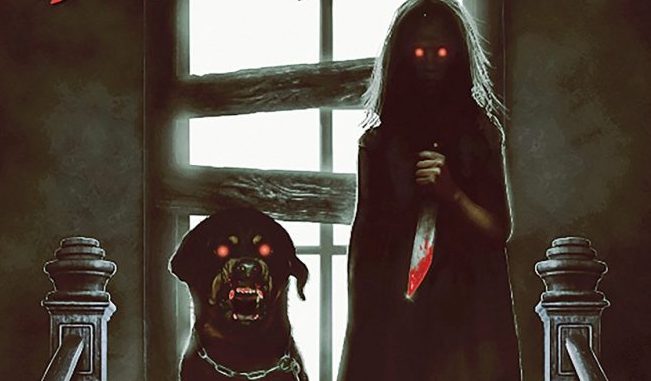 A lesser known slasher from the early 1980s, this was made in a very healthy period for horror films when there were many releases a week thanks to video. Of course that is not to say that many of them were any good, but the genre was popular, especially on the video market. The slasher sub-genre led the way following the likes of Halloween (1978) and Friday the Thirteenth (1980), but Madhouse (1981) resembles a film that came out the same year, Happy Birthday to Me, especially in the climax ‘party’ scene. The film was written, produced and directed by Greek director Ovidio G. Assonitis as an Italian-American co-production with a mostly Italian crew and American cast – so I am sure there were plenty of issues around communication during the production. This horror film also brings in many other elements beyond the slasher that sometimes over complicates the plot: madness (a typical slasher trope), suggestions of possession, a rabid killer dog and sibling rivalry with a twisted family past. While it might seem like a slasher it also has to be remembered that this is an Italian that brings to it many of the excesses of an Italian horror film and giallos.

The main character in the film is Trish Everly (Julia Sullivan), a schoolteacher to deaf children. As an adult she is still haunted by her childhood past when her twin sister, Mary was disfigured in an accident of which Trish carries some guilt and her sister’s mental collapse. Mary is still kept under isolation in a mental institution. As their birthday approaches (we are reminded how many days it is and its significance by intertitles) Trish is encouraged to visit the hospital and see her by her Uncle James (Dennis Robertson), a Catholic priest, as Trish is nervous due to Mary’s often violent outbursts. Despite Father James reminding her that she is being silly Trish was right to be anxious. Later that night Mary escapes from the institution, troubling and scaring Trish. Not long after a serious of gruesome murders begin to happen mostly carried out by a rabid rottweiler dog, including the mauling by the dog of a young deaf boy, one of Trish’s student’s. Most of the remainder of the action takes place in the large gothicky family home as Trish becomes victimised by her sister and it transpires her equally mad Uncle James.

The crew on Madhouse were mostly Italian but it was shot in the old Southern US city of Savannah, Georgia, mostly in what was allegedly an old haunted house. It’s a great location to shoot the film but this slasher does get lost among the mire of other horror films made at the time, although it did have its profile raised when it was classified in the UK by the DPP (Director of Public Prosecutions) as a video nasty and although it did not receive a certification in the UK, the video nasty moniker was subsequently lifted. The film is no worse in content than any other film released at the time. The most shocking scene is perhaps the drilling of the dog’s head and may prove unsettling for some viewers. The acting is in places better than many similar films with a better than average from a horror film performance by Julia Sullivan in the lead. Michael McRae as her boyfriend, however, is dreadful.