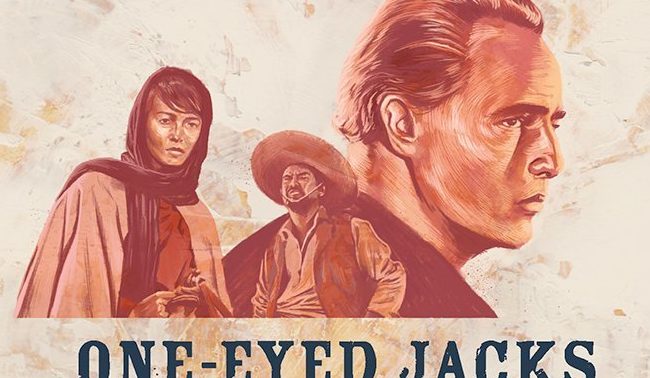 In the introduction to the film by Martin Scorsese he states that there is no other western like this and is unique in the western genre (although arguably Marlon Brando was an even stranger western with 1976’s The Missouri Breaks). It feels and looks different from other films in the genre, but unfortunately for legal reasons it unfortunately fell into the public domain which meant that it was released in some very poor prints and was widely available on budget label videos, DVDs and downloads. What a pleasure, therefore, that it is now available as a 4K restored print that makes the best of its widescreen rather than the truncated 4:3 version to fit the old TV formats and; shown here in 16:9 – 1.85:1 and was originally shot and shown in VistaVision from Paramount Studios and proved to be the last film shot using that process.

The plot of One-Eyed Jacks has a classic western plot driver; what could be described as revenge being a dish best served cold. The film opens in Sonora, Mexico with Rio (Marlon Brando), his partner Dad Longworth (Karl Malden) and Doc robbing a bank. Doc is killed while Dad and Rio escape through the Sonoran Desert chased by Mexican rurales bandits and locals. Trapped on a desert ridge with a lame horse, Rio allows Doc to escape and get fresh horses. However, while escaping Doc has second thoughts and decides to leave Rio to his fate and escape with the stolen gold. Rio is surrounded and captured, spending the next 5 years in a Sonora Prison. 5 years later he escapes, eventually making his way to Monterey, California with his new gang, including the aggressive Bob Emory (Ben Johnson). He is in Monterey for two reasons – to rob the bank and avenge the betrayal by Dad who is now the sheriff of Monterey. He finds that Monterey is enjoying a fiesta and must bide his time. He approaches Dad in friendly terms and even falls for Dad’s step-daughter, Louisa (Pina Pellicer). When Dad learns of this relationship he becomes angry and is aware that Rio wants to kill him and tries to usurp, entrap him and gives him a public flogging. Rio must balance between his planned future with Louisa and his revenge against her step-father.

One-Eyed Jacks had a troubled production and it certainly has its flaws. But it is also a very interesting film. It was originally set to be directed by Stanley Kubrick (in what would have been Kubrick’s only western) with a script by Sam Peckinpah and what they would have produced would have been a very interesting film. Brando wanted Malden to play the sheriff whereas Kubrick wanted Spencer Tracy. Brando won and took over direction. There is some inconsistencies to the film and much of this is possibly due to Brando’s lack of experience behind the camera. This is hardly surprising as the finished film was whittled down from over 5 hours to 141 minutes. The film still suffers a little from its length and may have benefited from some tighter editing. It is a beautiful to look at film and most assuredly benefits from its restoration by Martin Scorsese’s The Film Foundation, bringing out the beauty of the showdown near the beginning of the film in the Sonoran Desert and gives greater depth to the widescreen vistas.

The extras mostly focus on Brando himself with a 1994 Channel 4 documentary called ‘The Wild One’ and extended interviews on Brando with directors Arthur Penn and Francis Ford Coppola. As interesting as these are it would have been nice to have a contextualising documentary on the film beyond the interesting 2 minute introduction to the film by Martin Scorsese. Never the less it is a treat to see One-Eyed Jacks as it should be seen.