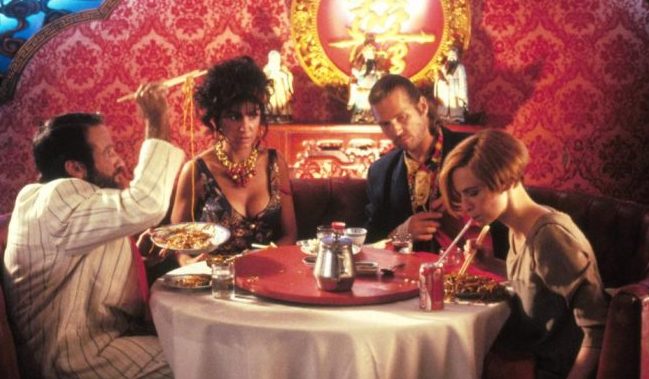 Without wishing to sound like a marketing tag line, The Fisher King (1991) is a story of two down on their luck individuals who living under different circumstances find redemption and in a round-about way find and accept themselves. The film opens focussing on successful but narcissistic misanthropic shock-jock Jack Lucas (Jeff Bridges) who one day after the regular insults he dishes out to his radio show callers advises a mentally unstable caller to shoot up a bunch of people in a restaurant which he duly does. This is the end of Jack’s career. Jump ahead three years later and Jack is now living with his sassy girlfriend Anne (Mercedes Ruehl) who runs  a small video store. Anne has supported him despite his slump into depression and drink. Jack spends most of his time drunk and feeling sorry for himself. One such evening he makes his way to the East River and is about to throw himself in while at the same time faces a mugging until saved by a group of bums led by Parry (Robin Williams), a friendly, deluded, warm hearted and generous down on his luck character. Immediately, Jack is drawn to Parry whom he goes on a walk through Manhattan with. He shows the essentially uptight Jack how to relax including stripping naked in Central Park at midnight to teach Jack how to be free. Parry also tells Jack he is searching for the Holy Grail and takes him to this fortress and castle like house on the Upper East Side where he tells him the Holy Grail is. Of course Jack thinks Parry is nuts but is never the less intrigued. In time Jack finds out that Parry’s real name is Henry Sagan and was a college professor when his wife was murdered leading to Parry’s mental collapse and his road to becoming a bum. At this point Jack begins to identify with Parry who has retreated into a fantasy world searching for the Fisher King, the guardian of the Holy Grail. Jack also learns that Parry is in love with an office girl he sees daily. The girl is Lydia (Amanda Plummer), a ditzy, quirky and clumsy young woman where Jack sees an opportunity to repay the debt to Parry and begins to plot to get these two shy people together.

Like this film, director Terry Gilliam is a unique director. He has a vivid and adventerous imagination. As with the animations he provided for the Monty Python films, Gilliam’s films matured. The fantasy, The Adventures of Baron Munchausen (1988) was slated on its release and by the early 1990s Gilliam was wounded by the critical reception and lost some of his nerve as a filmmaker. He was approached by producers Debra Hill and Lynda Obst who saw both the value in Gilliam and the extraordinary script by Richard LaGravenese. Thankfully rejected by Walt Disney the producers were given backing by Columbia-TriStar to make a more adult film which is when they got Gilliam on board. When Gilliam and LaGravenese got together the Arthurian sub-plot was woven in, perfectly bringing some of Gilliam’s most imaginative ideas to the fore. One of the most challenging is the appearance of the Red Knight who appears on the Manhattan street as a nightmarish vision of Parry’s in all it’s fire breathing hellish abomination. Each appearance of the Red Knight sends Parry into a catatonic state of fear and paralysis that even gives in to some comic manifestations as he runs down 42nd street screaming in fear wearing an oversized white suit given to him by Jack with arms a-flapping. There is a lengthy extra on the disc that even goes into the creation of these appearances.

The Fisher King is not really a comedy and not really fantasy. In many ways it defies any kind of genre classification but also it would not be inappropriate to label it one of these things. Yet it also has some very funny moments including support from the likes of Michael Jeter who makes an hilarious very camp bum. Jack hires him to dress in drag (complete with stubble, a blonde wig and moustache) to serenade Lydia to let her know she has won free membership to Jack’s girlfriend’s video store in front of all her office colleagues. Later he is tragic as Jack ignores him outside of his corporate radio building. Elsewhere, Robin Williams surprisingly downplays the excessive over the top comedy he normally associated with him. Given how exaggerated much of the film is to any reality, in being this way he pulls off one of his career best performances. He pitches the sentiment perfectly too.

The extras on the disc are very weighty from an hour long documentary about the making of the film to Jeff Bridges presenting his own album of black and white photos he took during the production. I would not be surprised that in time and certainly since the sad loss of Robin Williams this film will attain the classic status that it deserves.