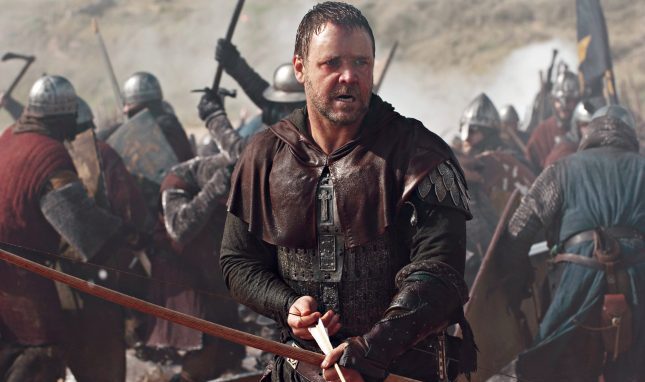 Robin Hood is an endurable folk hero. Whether he really existed or not, is there any other folk hero or has endured and returned time and time again to thrill? Even in newspapers, every now and again there is a story about someone robbing from the rich to give to the poor and labelled a ‘modern day Robin Hood’. But who was Robin Hood? This has also been the source of much debate and discussion in academia. He is often thought of as being Robin of Loxley and elsewhere as the Earl of Huntingdon. The constant was that he hailed from Nottinghamshire and lived in and around Nottingham Forest. Other areas around this sceptered isla have also adopted his name with connections to him, including the lovely fishing village near Whitby, Robin Hood’s Bay as well as hills in the shires named after him. It is also written that he supported Richard I the Lionheart and helped save his throne after he had been kidnapped in Europe on returning from the Crusades while King John abused his seat of power with the support of a cast of characters that in various tellings included Guy of Gisbourne and the Sheriff of Nottingham who greedily taxed the people. Robin was meanwhile supported by his own bunch of characters: Little John, Alan à Dale, Will Scarlett, Much the Miller and Friar Tuck, as well as Lady Marian, the love interest.

Dave Thompson’s latest book in the FAQ series published by Applause is ‘Robin Hood FAQ’ and covers just this subject. The book begins with  a brief history of who the real Robin Hood might have been before going onto covering the history of the time surrounding Robin Hood, Richard the Lionheart, the Crusades as well as the various cast of Merrie Men and who these characters might have been and who they may represent. What is a constant is that the story is set in the 1190s as Richard I is heading back from the Crusades and the ransom that was raised when he was kidnapped in Europe by Duke Leopold of Austria. England was left in the hands of Prince John (later King John), brother of King Richard. In the storties and films, to varying degrees, John is one of the villains of the piece along with a varied cast of characters including Sir Guy of Gisbourne and the Sheriff of Nottingham among others, in the stories nefariously raising taxes among the poor of England and under Norman rather than Saxon control. One of the latest tellings of the story, Ridley Scott’s 2010 Robin Hood takes absolute liberties with history and the story. In typical Scott style there is a gritty earthy realism to the telling and took the liberty to set the story up before the better known aspects of Robin Hood. However, due to a lukewarm critical response and poor box-office takings a sequel was never made.

True or not, the origins of the tales of Robin Hood were handed down from a series of poems and ballads dating back as far as as the 13th century and were constantly told in different versions before they became tales in penny dreadfuls in the 18th century, Victorian stories before Hollywood took up the story. There were adaptations as early as 1912, but it was the 1922 United Artists film that began the ‘classic’ Robin Hood as the swashbuckling hero we imagine today. The great romantic hero of the silent period, Douglas Fairbanks Snr. was the star and he danced and pranced his way through this romantic swashbuckler once he was in his tights and feathered cap. The action, fight sequences and stunts were of the first order, among the most energetic of silent cinema, not to mentioned the phemomenal budget and building a huge castle in Hollywood. Through the 1950s and 60s there were many versions of this, including as a sub-hero in the Ivanhoe films, adapted from Walter Scott’s romantic Victorian novel. But for my money it is Errol Flynn’s 1938 The Adventures of Robin Hood that is the greatest version. Unashamedly romanticised and colourfully shot in Technicolor the action is outstanding, still thrills with some great tongue-in-cheek dialogue and Flynn once again ascerting himself as the greatest of all swashbucklers, while Kevin Costner’s big budget and hugely successful Robin Hood, Prince of Thieves (1991) is probably best forgotten.

Unfortunately not so much coverage is given to Flynn’s film in Thompson’s book. While ‘Robin Hood FAQ’ is classed as a book to be filed under Film/Television it’s not until about page 220 when it focuses solely on both the film and television adaptations, glossing over each adaptation. It does mention different films in passing up to this point. The book is though very well illustrated and covers the cultural history of this very English character thoroughly. All black and white illustrations it is interesting that the image of Robin also remains pretty constant (Fairbanks and Flynn still endure, while it is unlikely Russell Crowe’s overweight RH is less likely to endure). Thompson’s writing still is thankfully not overly academic but still remains an entertaining and informative read.