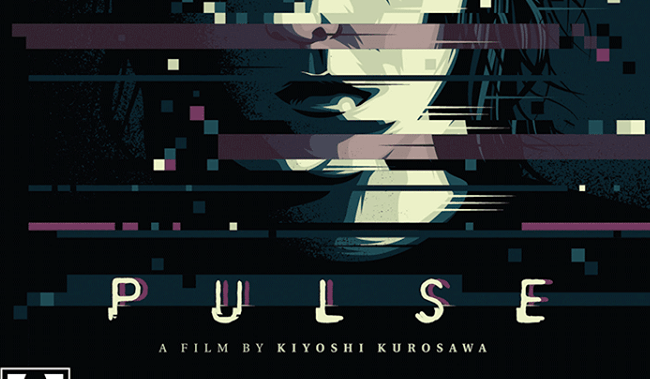 What makes Japanese horror films so effective? There is less blood, guts and gore, less of what is known in the horror business as ‘the bus’, that red herring scare setting up for the real scare. Most of us have heard of Hannah Arendt’s statement about the banality of evil when talking about Nazis on trial at Nuremberg. That statement can be turned round as the evil of banality when watching Japanese horror films, or J-Horror as they became known as generically. In Japanese horror films the everyday becomes a conduit for traditional ghosts out to threaten, unnerve and even kill. In Ring (1998) that threat was a video tape and a telephone, in One Missed Call (2003) it was the mobile phone, in Dark Water (2002), a bath or water and in Retribution (2006) a coat button. In the latest release by Arrow Video, Pulse (2001) it is the internet itself that serves as that conduit. One of the leading exponents of this kind of cinema is Kiyoshi Kurosawa, director of Pulse and the recent Creepy (2016).

Pulse is a genuinely scary horror film, even if it doesn’t make a lot of sense. But this doesn’t matter. The basic premise for this film is about how young people are literally corrupted by ghosts in the machine. The film is populated by young people who are becoming depressed with strange, familiar and banal images they see on the computer screen. This depression in most cases leads to suicide. Where they die leaves a black human form like stain next to where they expired with them returning as ghosts, either in the real world or on the computer screen. In the opening part of the film a friend of other colleagues is missing. His friend Michi finds him at his messy apartment and while there he hangs himself. The computer disc he has been working on shows imagery of the young man either in the shadows of his apartment or sitting at his computer. As banal as these may sound they have a very eerie frisson to them, especially the figurative forms in the shadows. In time each of the friends become affected and did themselves until their ghosts begin to populate the world of the living.

The film could be accused of having lots of plot holes with little explanation as to what is really going on; there is no neat wrap up or conclusion to this film. What it is, is incredibly eerie. Kurosawa understands how to set this up. The films most effective moments include the suicide of a young man on the top of an industrial silo. We see her fall to her death in a very effective and well executed scene or the appearance of a ghost that walks towards the camera in a slow motion march while making some exaggurated jerky moves. This is a director that can put the strange into the most ordinary of situations by merely adding a shadow from which we know or suspect there is a ghost. Elsewhere there are red taped door frames that spell the bizarre lies beyond. Kurosawa has proved this time and time again in his other films.

Kiyoshi Kurosawa came to international prominence with his first horror film, Cure (1997) after making films for years. Some of his similarly effective horror films, such as Retribution have yet to see the light of day in the UK. In an extra on the disc, American horror filmmakers Adam Wingard and Simon Barrett discuss how they first came across these J-Horror films on poor printed bootleg quality discs, much in the way the Video Nasties were seen by audiences in the 1980s. For them, this poor quality gave the J-Horror films an added eeriness. As with many of these J-Horror films they were remade as Hollywood films, their release in the US deliberately curtailed for this to happen. Pulse was remade in the US in 2006 and starred Kristen Bell. Other films were such as feardotcom (2002) were influenced by J-Horror, but liked their cleverness. (feardotcom is about people who die 48 hours after looking at a website.) However, in the UK Pulse had been released previously in the UK on the Tartan Video label but has now been given (the delayed) all bells and whistles released by Arrow packed with extras including a lengthy interview with Kurosawa about his career from his beginnings up to Pulse and its success at Cannes. Other extras include an interview with cinematographer Junichiro Hayashi, suitably titled ‘Creepy Images’, footage from its presentation at Cannes and a Q&A screening in Tokyo. For any fans of horror films the films of Kiyoshi Kurosawa are a must.