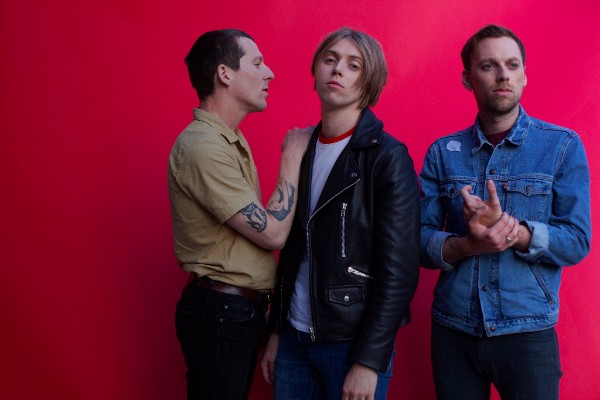 The wondrous Brighton based 3 piece THE XCERTS can now announce their long awaited return, with their brand new single ‘Feels Like Falling In Love’, which received its debut on the Radio 1 Rock Show as The Rockest Record (track of the week) and is released on all digital platforms through Raygun Records.

‘Feels Like Falling In Love’ is an instant classic, fusing the heady euphoria production and stadium pomp of 80’s Springsteen and Tom Petty with the dry, sharp wit of Cheap Trick. A euphoric, exuberant anthem about falling in love written by a romantic realist, soundtracked like the hugest of 80’s movie anthems ever,

The track was recorded at Rockfield and Clarksville, produced by Gary Clark and Dave Eringa, mixed by Chris Sheldon and mastered by John Davies. The video was directed by Chris “MUG5” Maguire. An @riotwashere Production

From THE XCERTS front-man Murray Macleod: ‘Feels Like Falling In Love’ is about discovering a pinhole of light in the dark and turning it into the sun! We basically wanted to capture the feeling of the last scene in the Breakfast Club. Throw on your headphones, turn up the volume, punch the air as hard as possible and go live the best life you possibly can.”

“With the video, we wanted to capture the idea of self-imprisonment and the fight between light and dark. We worked with an incredible director named Chris Maguire who had a really strong vision and he has produced a video we are all incredibly proud of. This was the first time we had the budget to make a big, bright, lavish pop video so we really went to town on it.”

The single is their first new music since the much loved and critically lauded ‘There Is Only You’ album was released in 2014 and follows on from 3 years touring and playing shows with the likes of Biffy Clyro, Nothing But Thieves, Brand New, Deaf Havana, The Amazons, You Me At Six, Manchester Orchestra and more.