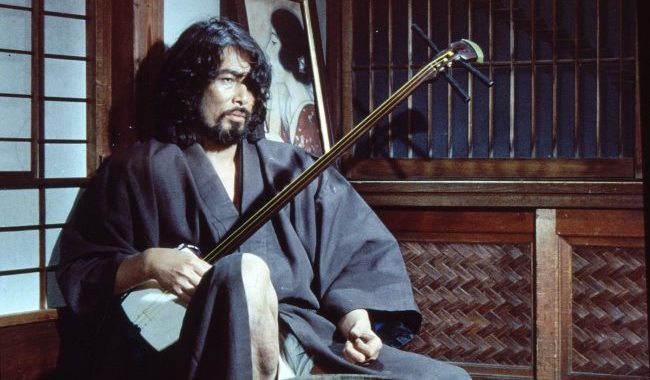 Released through Arrow Academy is Seijun Suzuki’s ‘The Taisho Trilogy’, a set of three films with a great deal of history behind them and, it has to said none are an easy view. Suzuki was a director who made a bunch of popular Yakuza films for Nikkatsu Studios in the 1960s (best known are Youth of the Beast, 1963, Tokyo Drifter, 1966 and Branded to Kill, 1967) but fell out with the studio for his unorthodox and some said his parodying of the genre, especially Branded to Kill. This led to Nikkatsu taking the decision to sack him. Apart from a couple of TV movies Suzuki was left in the wilderness for over 10 years and barred from directing. As a result he came back with his ‘Taisho Trilogy’ of films beginning with Zigeunerweisen (1980). Most definately an art house film, to show it Suzuki had to set up Cinema Plaset screenings; that is blow-up inflatable tents with bench seats on the top of department stores and in fields in order that this film and its follow-up were seen.

The title of the trilogy collectively is ‘Taisho’, referring to the period the films are set in the time Emperor Taisho in the years from 1912 – 1926. Much like Weimar Germany, or the so-called flapper age this was seen as a period of decadence, and in the case of Japan apparent western influences were strong and there was a growth in the arts. This was all before the Showa Period that led to militarism and the Second World War. All of the films from the Taisho Trilogy of course date from this period: Zigeunerweisen, Kagero-za (1981) and Yumeji (1991), all of which of course reflect these times.

The first of the films, the one that brought Suzuki out of the wilderness was Zigeunerweisen follows the relationship between a straight man dressed in western clothes (Toshio Fujita) and a long haired wild man (Yoshio Harada, who appears in all three films) and is dressed in traditional clothes. The straight man, Aoshi is a German professor who is introduced to a record by the wild man, Nakasago, a Germanic gypsy violin piece that he plays on a gramaphone (hence the title of the film, literally meaning ‘gypsy weeds’ in German). Together the two men share their loves, relationships and erotic encounters with women.

The next film, made back to back with Zigeunerweisen, Kagero-za (released in the USA under the title, ‘Heat Haze Theatre’). This is perhaps the least accessible of the three films. Set in 1926 it’s the story of a playwright (Yusaka Matsuda) who sees a beautiful woman who may or may not be a ghost. It’s not until near the end of the film that it becomes more interesting with some arresting imagery. The finale has a lengthy scene in a children’s theatre when finally the set falls down.

The final film, Yumeji did not get a release until 1991 but is argueably the most interesting and visually captivating of the three films. Yumeji Takehisa (who lived between 1884 and his death in 1934) (played here by a well known Japanese musical singer, Kenji Sawada) was an artist of the Taisho Period. Specifically the story is centered around a painting by Takehisa of a woman in red. The film opens with the artist running through a crowd of people with colourful balls bouncing in the air when he sees a vision of a woman in a tree with his back turned to him. He is enamoured by this vision of ecstasy and spends the rest of the film in pursuit of the vision and finds her in a widow whose husband he may or may not have once duelled with.

All three films are lengthy (144/139/128 minutes respectively) and are at times confusing to follow with little in the way of traditional narrative. They are also beautifully composed with the colours coming out well in the transfer. Suzuki, as evident even in his earlier films proved that he could create some wonderfully poetic images. The audience will be bombarded with surreal and dreamlike imagery and should not necessarily seek any kind of understanding in the symbols. Some, such as the cherries emerging in the water in a barrel with a ghost subermerged within from Kagero-za are enduring images referenced earlier in the film, while the appearance of artistic creativity in Yumeji clearly are images by Takehisa, as well as referencing fin-de-siècle British artist Aubrey Beardsley and turn of the century Viennese painter Egon Schiele’s erotic paintings.

Nicely packaged, it would be important to view these films with the contextual introductions and visual essays by Asian film expert Tony Rayns who brings his vast knowledge and expertise in the subject matter to table. Elsewhere other extras include an interview with Suzuki and a Making Of documentary accompanying Yumeji.