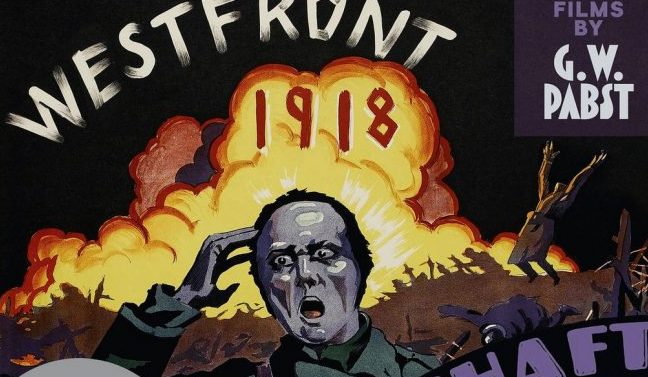 Interestingly Georg Wilhem Pabst’s Westfront 1918 was released just a month after the Universal production of All Quiet on the Western Front had its premiere in April 1930 in Los Angeles, meaning that both films were in production at the same time. A year before this German author Erich Maria Remarque’s novel of the American film had been published causing great controversy in Germany for its anti-war message, especially among the Far Right. For the far-right the anti-war sentiment was red rag to a bull. Pabst’s film goes even further than All Quiet on the Western Front in that there is little sentiment in the film, forgiving the French girl Jacqueline’s flirting and relationship with the troops. I am not suggesting that relationships, sexual or otherwise do not take place between French citizens and the German invaders, it just smacks of a kind of acquiescence that seems unrealistic when she is mauled by the four friends the film focuses on. Never the less there is far less sentiment here than in All Quiet on the Western Front. Westfront 1918 makes no bones about the carnage on the battlefields and in the minds of the prisoners. In this sense the battle scenes are largely similarly realistic and harrowing with muddy trenches, barbed wire and large explosions. Where Westfront 1918 does depart from Lewis Milestone’s film is the depictions of the homefront. In the Hollywood film home is seen as a buccolic place in which the principal character tries to convince the naive folk back home that the war is horrific and not a heroic deed. By 1918 German citizens were well aware of the horrors of the war and were suffering themselves from hunger and starvation and it is strongly argued that the pressures of those on the homefront and the resultant rise of the communists (Sparticists) led to the German surrender in Novemer 1918.

By 1930 when Westfront 1918 was released Germany had been through humiliation, hyper-inflation brought by the reparation payments to the victorious Allies, the Wall Street Crash and the rise of the Far Left and Far Right led by the Nazis. Little surprising that this film, made 11 years after the end of the Great War was a zeitgeist film that tapped into still strong resentments and those with strong anti-war films and those pro-military and of a nationalist and traditionalist leaning.

The film that accompanies Westfront 1918, Kameradschaft (1931) is a story about a mining disaster, might not on the surface share a similar anti-war sentiment but these films are politically very close and form a continuity of political ideology through Pabst’s work during this creative period of his career. Kameradschaft (meaning comradeship) is based off a true story of a mining disaster that occurred on the French side of the Franco-Belgian border in a town called Courrières in 1906 in which a mine collapse led to 1,200 miners trapped. Pabst has updated the story to the present day and set it on the French-German border. When a mine collapses, following a gas explosion German miners offer their help, despite animosity. Both French and German miners agree that they are all miners and show unity and comradeship and join hands to rescue survivors. As with Westfront 1918 there is a strong anti-war sentiment. Since the First World War and the French occupied the Rhineland on the border until they were kicked out when Hitler ordered German troops to march in 1936. Often the French occupiers treated the Germans poorly and in turn there were was still a great deal of animosity towards the Germans for what they experienced during the First World War. Therefore the message of the film is quite a powerful message and a left leaning one at that (of course the word kameradschaft or comrade has Left wing connotations), mirroring the director’s political beliefs at the time.

Throughout the 1920s G.W. Pabst could barely put a foot wrong and made a great film after great film. Equally he transferred to sound just as well and the problems with recording sound that were experienced in Hollywood he did not experience. Westfront 1918 was released less than a couple of months after the release of Germany’s first film completely shot in sound, The Blue Angel starring Marlene Dietrich. However, this did not inhibit Pabst in both films who was still able to move the camera through the trenches and the battlefields in one film and the flooded mineshafts of the other film. Kameradschaft would mark the end of a successful career for Pabst for although he went on to make many more films none of them showed his unique vision as a filmmaker. When the Nazis came to power he fled to France and later Austria, but was caught up in the Anschluss between Germany and Austria in 1938 without an ability to escape from the Nazis. He was requested by Propaganda Minister Joseph Goebbels to continue making films. As a former left wing filmmaker his position was perilous but continued by making light fluffy films throughout the war and after.

Each film has an approximate 15 minute, excellent contextual talks on the films by Pabst scholar, Jan-Christopher Horak.