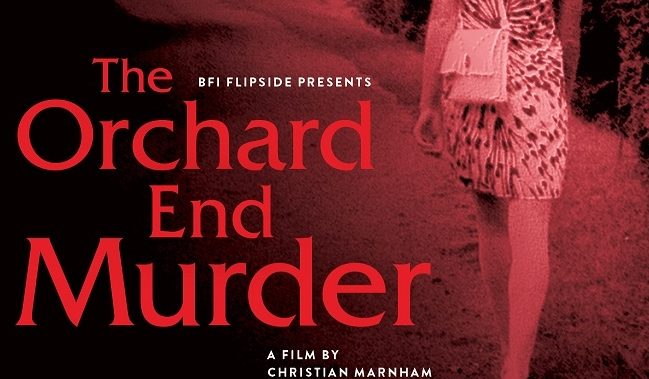 The latest release by BFI on their Flipside label is The Orchard End Murder (1981), the 35th title released by BFI on their subsidiary label. Flipside unearth films that have been overlooked over the years, most of which date from the 1960s and 70s. The Orchard End Murder is a case in point of a forgotten film. Originally made as a tax loss, money was raised and was released by distributors GTO who bought the rights to the film and made a tidy profit from it.  The film was released as a support feature to an American horror film that did well at the box-office, Dead and Buried, thus making the film a success, but neither the cast nor crew saw any of the earnings.

The story is a fairly simple murder thriller. The film’s director, Christian Marnham had grown up in the area where the film was shot, in a very bucolic Kent. He was aware of a murder that took place in a nearby town and thought the setting and what took place would make for an effective thriller. The opening establishing shots demonstrate a talent in Marnham that sadly was never truly realised as he has made so few films. The film opens with a crane shot of a peaceful, very English scene with a cricket match taking place. The camera pans away, still in the crane to an orchard that will become relevant to the story and eventually panning down to a couple; it is initially unclear whether there is a struggle going on or lovemaking is taking place until a closer shot shows us it’s the latter. A fashionably dressed city girl in a black and white Op Art design dress is making love with her new boyfriend dressed in cricket whites. He says he needs to return to the match and will be missed. The next shot we see a suggestive close-up of a bowler polishing his ball by his crutch. There is some Hitchcockian cheekiness going on here. During the cricket match the girl looks bored and wanders off. She winds up at an old and small railway worker’s cottage, amused by all the colourful gnomes in the well tended garden. They are watched over by the station master, a small hunchbacked homunculus who is friendly and invites the girl in for a cup of tea. She is wary but agrees when they interrupted by his simple, gigantic assistant, Ewen who slams a dead rabbit on the table, frightening the girl who takes flight. Later in the orchard the girl bumps into Ewen who is this time friendlier until he attempts to rape her before garroting her on a pile of apples in a quarry.

The plot of this small and short film is rather grisly and, as already mentioned there is some Hitchcock type of shtick in Marnham’s black humour in the way he shoots the film. Hitchcock’s penultimate film, Frenzy (1972) about a Covent Garden worker who moonlights as a tie-strangler springs to mind. The murder of the girl is quite similar to a couple of scenes in Frenzy too. Elsewhere on an extra Marnham talks about his career and the making of the film and even at times sounds like Hitch with his slightly camp brand of black humour and his approach to the film. All the more unfortunate therefore, that Marnham has not made more films.

There were no real stars in the film and while some of the lines delivered seem a little cardboard there are some incredibly well honed performances. Tracy Hyde was one of the few names in the film. Well, I say names. Hyde had appeared as an 11-year-old in the title role of Melody (1971). Now in her twenties she has a sexual energy in the film, contrasting with the either uptight or odd country bumpkins. Marnham speaks very highly of Hyde and her bravery at appearing in the nude as the cold weather was setting in during the shoot as well as her stoic and professional approach to the rape scene. In his first performance was Clive Mantle as the lumbering Ewen who often appeared as simple giants in his early years before he attained the role of Dr. Mike Barrett in the long running BBC drama ‘Casualty’. One of the other actors of note is Bill Wallis as the stationmaster and plays the role to a tee. There is also bit part played by Rik Mayall appearing in his first performance.

Elsewhere on the disc there is another interesting film, a 20 minute short that Marnham made in 1970. In his youth Marnham spent time with the local gypsies when he ended up at a fairground coming across what was proclaimed as the last original showman. In The Showman we see a group of spotty greasy head oiks watching fairground barker Wally Shufflebottom (complete with a bad American accent) inviting viewers to watch his knife show. He is flanked by two young women provocatively dancing. This show is a teaser for the main event when he invites them to a tent (for a fee of course paid to Shufflebottom’s grim faced looking wife) where he throws knives at the girls as with each set of throws they strip – Soho strip club meets the circus if you like. There is something seedy about this and of course is from another time. The documentary is a genuine time capsule piece that not only highlights the last showman but a time before political correctness took over or the HSE could get involved (highly unlikely that these girls or anyone else was covered by insurance).