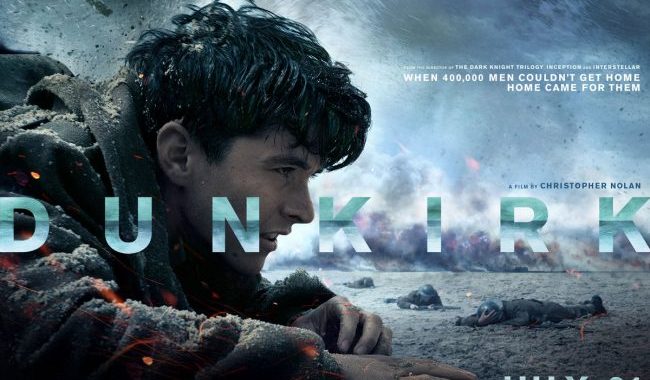 Dunkirk at the Science Museum IMAX

Much has been written about the immersive experience and the sound effects of Christopher Nolan’s latest film, Dunkirk – even the few remaining living veterans attending the premiere claimed that the volume of the film was louder than the actual bombardments on the beach. Viewing it at the IMAX cinema at the Science Museum did not disappoint. What has the screening of a war film to do with the Science Museum I hear you ask. In the Fly Zone area of the Science Museum there are the flight simulators, including 360 pods, a POV ride in a Typhoon and the Red Arrows. It would seem Dunkirk is an extension to that experience and then some, particularly with the two Spitfire pilots picking off Heinkels, Stukas and Messerschmidts as they strafe and bomb the ships and soldiers of the British Expeditionary Force being transported out of France. At the screening I attended there were even visitors who had to leave due to motion sickness. Immersive indeed.

The story of the evacuation of Dunkirk is one familiar to anyone growing up in Britain. Prime Minister Winston Churchill was able to turn a failure into victory through three major speeches in what he called “the miracle of deliverance”. We all know them: “We will fight on the beaches” and the “blood, sweat and tears” speeches. Nolan’s film gives little in the way of a premise or background, he doesn’t need to. By May 1940 all was but lost for the British, French and Begium Allies as the German Blitzkrieg pushed them back to a small pocket at Dunkirk. Nolan focuses on the three forces from land, sea and air as we follow the stories of a small party of young soldiers desperately trying to get off the beach; on the sea, Commander Bolton (Kenneth Branagh) is attempting to organise from the front the retreating soldiers being able to board vessels and the air in which three Spitfire pilots fend off the Luftwaffe. One of the main character’s in the film is Mark Rylance’s small boat owner, Dawson, who, rather than let the Royal Navy commandeer his vessel takes it out himself with his son Peter (Tom Glynn Carney) and a young 15-year-old school boy George (Barry Keoghan) who also jumps aboard for the journey; viewing in the IMAX gives a real sense of the small boat bobbing on the rough seas in what should be a short crossing. As does the turning and weaving of the spitfires.

We never really see the German tormentors, only brief glimpses of a dive bombing Stuka or the aircraft in the sights of the Spitfire pilots. Yet, this probably contains some of the best World War II dogfighting sequences since the big budget Battle of Britain made way back in 1969. Another easy comparison would be the 1958 film Dunkirk. About 30 minutes longer than Christopher Nolan’s film, the 1958 film has a longer build-up, greater focus on the British army entering the besieged town and the ‘spirit’ of Dunkirk bringing in many of the major players. One of the main characters in that film is a small boat owner (played by Richard Attenborough) as we see more of life on the home-front as his character struggles with taking his boat out to save the soldiers with a suggestion of cowardice from his character. It would, therefore, be disingenuous to call Nolan’s film a remake of Leslie Norman’s film (he was the father of the late Barry Norman). The older film falls more into the style of the many British films made in the 15 years after the end of the war as they highlighted British character in a time of post-war austerity (well some things haven’t changed). Other writers have not missed the opportunity to talk about the British spirit post-Brexit in Christopher Nolan’s film, but I am not even going to go there.

As mentioned earlier, much has been made of the sound volume of Dunkirk. This is where the director has created a new language in suspenseful story telling. Throughout, broken only by screaming Stukas, the occasional shell bursting and the rattle of machine gun fire the soundtrack by Hans Zimmer is tension building in an almost rhythmic ambient score, like a ticking clock heading to disaster. Zimmer’s score used a rhythmic pulsing sound that was intended to resemble a Shepard tone as it builds in tension and is unrelenting throughout the film, with the soundtrack only falling silent towards the end. There is also an economic use of language throughout, very little dialogue with most of of the platitudes coming from Branagh’s character as the Commander. Tom Hardy for example, who plays one of the Spitfire pilots has only about 10 lives of dialogue in the whole film.

There are high expectations from Dunkirk since it generated a huge amount of interest at the end of last year. Prior to last year’s screening of Rogue One: A Star Wars Story, there was an over 5 minute teaser trailer that certainly generated plenty of interest. It also has one of the widest distributions of films to be screened in 70mm for over 25 years with the film’s distributor, Warner Brothers hoping to benefit from the summer blockbuster season. It is unequivocally recommended to see the film in 70mm rather than the usual 35mm to get the best out of it, making the most of the sky and the sea (Nolan’s colourisation and space in the film reminds us throughout of Churchill’s fighting on the beaches, on the seas, on land and in the air speech). Nolan used no romanticism in his telling in the way Steven Spielberg did with the otherwise excellent Saving Private Ryan (1998) nor is there, thankfully any distracted love interest. Instead he gives us an impression and as much a sense of what it might have been like to have been there, the sense of panic, claustrophobia and determination than many other films otherwise would have.