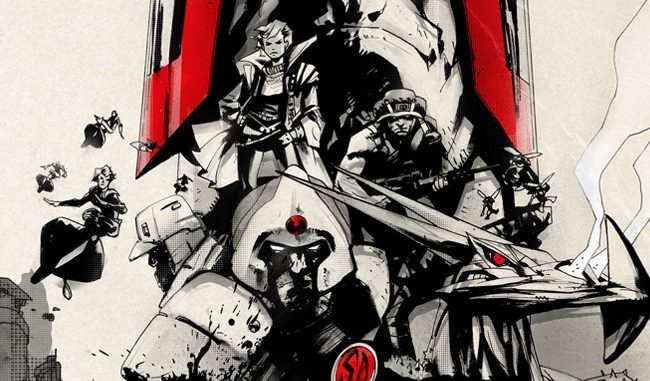 The documentary Future Shock! The Story of 2000AD, made and released in 2015 charts the story of the British comic, 2000AD. First published in 1977 the documentary takes the social conditions in the UK at the time as its starting position: a time of punk, Union power, the rise of Thatcherism and social unrest. 2000AD creator, Pat Mills wanted a comic that deliberately challenged the establishment. Prior to 2000AD, comics such as Valiant, Lion and Victor were looking old hat and becoming increasinly sillier. I could resonate with this even as an 8-year-old growing up in the north of England. There was something appealing about both 2000AD and Action Comic, another comic creation by Mills. Action Comic was soon banned for its violence and adult themes which had the kind of graphic violence in comic form that frankly an 8-year-old then could not otherwise get access to through the films it was influenced by. With Action Comic banned Mills went on to make the still adult themed 2000AD, but this time with a science-fiction theme running through it, capitalising I am sure on the recent success of Star Wars; although arguably 2000AD was more adult in content than the fairy-tale story that runs through that summer’s blockbuster release. Yet aside from contemporary war comics such as Battle, Warlord and Commando, one comic that could be similar and a pre-cursor was also the brilliant and now forgotten Vulcan. And if none of these appealed, then there was always the abundance of Marvel or DC comicsfrom the States (although I am sure that Marvel nearly always outsold DC in the 1970s).

Each of the writers, illustrators and comic founders interviewed in the documentary recognise the punk sensibility in the comic; look at Judge Dredd’s oversized feet looking like Doctor Marten boots or Strontium Dog’s back back combed hair for some of that punk sensibility. Judge Dredd was the comic’s flagship star, a fascistic Dirty Harry type future cop who takes no nonesense and blasts the villains for the smallest of crimes in a crime ridden and overcrowded Mega City One. Other early characters include the aforementioned Strontium Dog, Dan Dare fighting the Mekons was appropriated from the safe, popular and long running Boys Own type of comic. The Eagle and ABC Warriors, robots fighting in an apocalyptic war. Another comic strip was Flesh, an ultra-violent and bloody Jurassic Park type of story about dinosaurs chewing up the humans.

Inevitably the comic’s success led to it becoming more of a business with new management and publishers taking over. By the 1990s the comic’s success was nearly its undoing as publishers had a more dominating say, threatening the comic’s future. Equally inevitably the success of the comic in the UK would attract the likes of DC Comics wanting to seduce over its artists and writers, what one observer successfully observed that 2000AD was becoming an apprenticeship for those go over to DC. Yet, that sensibility in 2000AD was something that never really translated so well to the US. This would culminate with the Hollywood version of Judge Dredd being made in 1995 starring Sylvester Stallone. To just about anyone, whether you were a fan of the comic or not, the film was a great disappointment. It wasn’t until the 2012 British-American co-production, Dredd in 2012 that cinema was able to redeem itself. Calls by Dredd fans for a sequel has so far fallen on deaf ears. However, the 2000AD team has recognised other very obvious cinematic borrowings from the comic in Hardware (1990), 28 Days Later (2002) and even the Transformer films emulating the ABC Warriors.

Much of the drive of Paul Goodwin’s documentary is the continual enthusiasm of Mills who’s not afraid to say it how it is when he vents about the industry and corporations becoming involved and start messing with his ‘child’. Many of the writers and illustrators equally add their own twopenth to the story of the comic and naturally ends with all the participants, including fans such as Anthrax’s Scott Ian and Portishead’s Geoff Barrow who all believe that the comic is currently in safe hands. Unless you are a fan of the comic it is unlikely that the documentary would be of any interest but for fans or any grown ups with an affection for reading this when they were younger it will be of great interest. The Arrow Video release is laced with many extras including extended interviews.