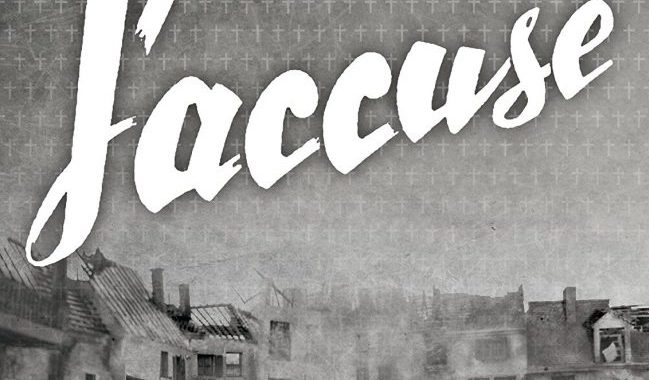 Also released the same week on Blu-ray as Abel Gance’s J’Accuse (1938) was G.W. Pabst’s Westfront 1918 (1930), a film made about the First World War from the German perspective. What is consistent with both these films, as well as Lewis Milestone and Carl Laemmle’s All Quiet on the Western Front (also 1930) is how raw the horrors of war still were for the survivors of the Great 1914-18 war. Last year BFI released Gance’s earlier acclaimed epic Napoleon (made in 1927) in a magnificent 3 disc set. Of course that film is about France’s dictator who bought about unity in France, eventually expansionism and increased French power and influence through war. Gance’s 1938 film (filmed in 1937) was a warning about nationalism and war.

The film opens in the trenches and battlefields around Verdun right at the end of the Great War in 1918. Jean Diaz (Victor Francen) is living in the trenches with his friends. Diaz has a confrontation with one comrade, Laurin as Diaz is having an affair with the man’s wife. Together Diaz and his comrades endure death and destruction in the trenches. The men eventually prepare for a reconnaissance mission that they know will mean their end. Their officer, Chimay (Jean Max) is unable to get hold of his commanding officer to confirm whether or not to go ahead, but orders it to go ahead anyway. Following the pulling of straws, all the men except Diaz are going but Diaz exchanges with a man who had children and saves him. After the assault all the men are killed and left for dead or dying in the trenches. That morning the Armistice is called for it is the 11th November 1918 and the fallen men are among the last of the dead in the Great War. Before he is buried Diaz is found alive, along with Laurin, his rival comrade who eventually dies in his hospital bed, leaving Diaz as the only survivor. He returns back home to the South of France but has vowed that he will not continue with his relationship with Edith (Line Noro) out of respect for his dead comrade but has also vowed that he will help her daughter, Flo.

Diaz has been traumatised by the war and strives to invent a machine that will prevent wars. His boss dies and the company is now managed by Chimay, his old commanding officer. Chimay also starts dating Flo much to Diaz’s dislike. He begins to go mad and alienates Edith and Flo as Europe heads towards another war. In his madness he raises the dead from the First World War at the cemetery and ossuary at Verdun.

Although this is essentially a remake of Gance’s own 1919 film he of course not only updates but really only uses the original film as a template. The story after the war is different and is made more relevant to the fears of a very insecure period between the wars. Following the end of the First World War the French had built the Maginot Line to protect it’s frontier against Germany (this failed of course during the Blitzkrieg of 1940), the Spanish Civil War was raging and Hitler was defying the League of Nations and re-building the German armed forces at a rapid rate; Hitler had already marched into Cologne and the Rhineland, kicking out the French occupiers and by the time the film was released had annexed Austria. The move towards war was growing daily and in intensity. Gance’s film is far from subtle, but it’s message is clear. In many of the battle scenes he uses a mixture of actual footage, as well as footage from his 1919 film.

Francen is brilliant in the lead role, elegant and mad at the same time. The scene of the dead rising from their graves is truly terrifying, arguably more horrific than in any horror film at the time, but this is not a horror film in the true sense but a parable against horror. It is mirrored with the ghosts of the dead walking at the end of All Quiet on the Western Front. It’s message is to warn France against nationalism and the world against war. Needless to say the film was hated by the Nazis and the far right. During the Second World War pro-occupation French critics did not waste any time in condemning it. At the same time it’s message is also naive and some have argued leftist. Yet there are also lessons about Gance’s own Napoleon and the message about historic figures from the past giving messages about the future.

This is the first time the film has been released on DVD or Blu-ray in the UK. It would be good to have seen it with the 1919 film. Never the less there is a worthwhile stills gallery and special collections gallery that displays the book that accompanied the film as well as an interesting commentary by Abel Gance expert, Paul Cuff and a thorough booklet.