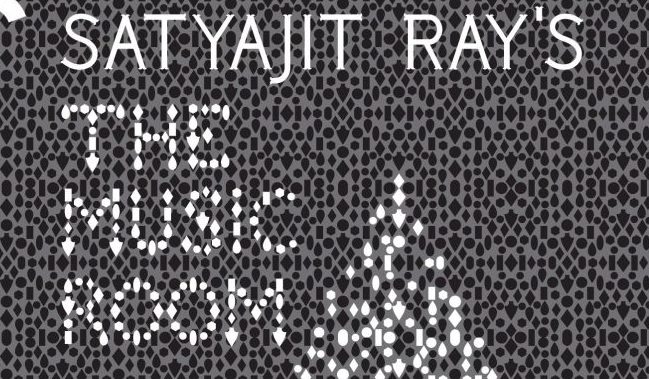 Satyajit Ray is the greatest progenitor of national cinema in India (the early Merchant-Ivory films would also fit into this bracket). What I mean by national cinema is a cinema that deals directly with a country’s present and past and a sense of identity. This does not include Bollywood films whose purpose is to entertain, largely to an Indian audience. In Great Britain this would include the Ealing films or films such as Remains of the Day (1993) (and most of Merchant-Ivory’s later films). Ray’s The Music Room (the Bengali title is Jalsaghar) (1958), the director’s fourth film is about a changing and slowly modernising society and those who refuse to move with the times.

The film is about and focuses on a Bengali zamindar, a land owner or what we would call landed gentry. His name is Biswambhar Roy (played by the great Indian actor, Chhabi Biswas) who lives in his mansion surrounded by barren land eaten up by the Ganges while he strives to uphold the traditions of the past and maintain the status quo fighting against a changing world. The Ganges is always seen in a dusty distance. It’s a story of stubborness and pride and how these human traits are damaging to those around the landlord, including to himself. But this is not the story of a bad person, but instead of someone who’s stubborness will be his undoing, a Freudian death wish if you like; it also costs him the death of his wife and beloved son. It doesn’t mean the zamindar is wrong it just means that he won’t accept change.

Satyajit Ray, arguably India’s greatest filmmaker came to international recognition with his first film, Pather Panchali (1955), the first of his Apu Trilogy films which won awards at the Cannes Film Festival. Ray almost shot exclusively on location in his native Bengal and all demonstrate different aspects of Bengali life. His fourth film contrasts strongly with the Apu films in that they focus on poverty, Pather Panchali looks at the world through a child’s eyes, while the second film, Aparajito (The Unvanquished) (1956) shows us Apu’s life having moved from rural Bengal to the poor urban areas of Varanasi. By contrast, The Music Room shows us a decaying feudal aristocracy. The location used was Nimtita Rajbari and acts as a perfect location, built in a colonial neo-classical style with Indian elements. The decayed elegance and the thrust of the film itself is reminiscent of Luchino Visconti’s films, a directo who also deals with decayed aristocracy in his native Italy.

One of the most important aspects of the film is music. Music is not only central to the film, it was also central to Ray himself. In Pather Panchali the sitar music of Ravi Shankar is used to great effect. In The Music Room the music was written and performed by maestro Vilyat Khan and dominates throughout. If you don’t like Indian music this will film grate on you as music is so stronly used in the film with some lengthy music sequences played in the landlord’s beloved music room. The musical highlight of the film is the dance in the zamindar’s music room that is both hypnotic and, dare I say it one of the great dance sequences in film history, albeit that it has largely gone unrecognised.

The Music Room is not as easy viewing as some of Ray’s films as the music is so dominant, but Biswas’s expressions and acting is so enjoyable to watch any thin areas of the plot can be forgiven (it is based off the 1938 short story, ‘Jalsaghar’ by Tarashankar Bandoppadhyay)

The picture image is sharp in this Criterion Collection release although it is somewhat grainy, I suspect mostly due to the quality of the film stock used. If you see any of the plentiful extras on the disc, writer Mira Nair’s interview is worth a watch as is Andrew Robinson’s interview who lends his expertise on Satyajit Ray and the film and is a very good analysis of the film. Elsewhere there is also a discussion on Ray and a 131 minute documentary about Ray made in 1984 that chronicles Ray’s life and career.