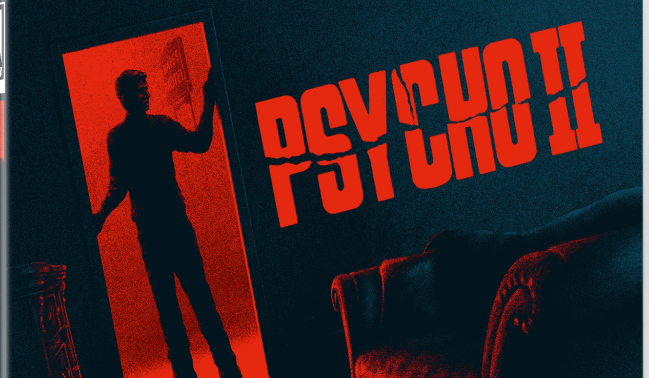 Psycho II (1983) opens with a prologue to remind viewers, in case we’d forgotten, of some of the key scenes in Alfred Hitchcock’s original Psycho (1960). Jump forward 22 years and the world has now shifted from black and white to colour. Norman Bates (in a repeat performance from Anthony Perkins and looking pretty good considering the years spent in a mental institution) is sitting in a courtroom and with the help of his caring doctor, Dr. Bill Raymond (Robert Loggia) who is pleading that Norman is cured and should be released. The judge agrees and decides to release Norman, much to the chagrin of Lila Loomis (Vera Miles, who is also making a return to the film from the original), sister of murdered Marion Crane (Janet Leigh in the original, you know her that was murdered in the shower). Norman returns back to his now rundown antique home and motel. He has also secured work at a nearby diner as a short order cook. All seems to be going well for him, including having to kick out the sleazy caretaker manager of Bates Motel who seems to have been using the place for stag parties. At the diner he befriends an apparently troubled young girl working there called Mary (Meg Tilly).

Mary has split with her boyfriend and Norman offers her a room to stay at his partially dilapidated American gothic house. From the moment we’re introduced to Mary alarm bells are meant to ring. Mary is wary but believes that Norman is a shy, nice and probably misunderstood man. However, mysterious things begin to happen to Norman and he becomes half conscious that the dark side of his character is returning. On one occasion he sees a warning message from his mother and there are signs that her presence is in the home and that there is someone other than Norman spying at her in the shower (again). Matters get worse after a young couple break into the cellar of the house to make out when ‘mother’ attacks and kills the boy.

Psycho II is filled with red herrings, more holes in the plot like Norman’s shower curtain and more than one un-subtle set of shots that are lifted straight from the original film. Shots repeated are part of the shower sequence as Norman spies through the wall on Mary taking a shower, but this time he does not attack and a scene in which Norman believes that he has seen his mother in the house as he runs down the staircase in a birds eye shot that is the same camera angle used in the shot just prior to Martin Balsam’s private detective being murdered in the original film. Some of the acting by Tilly is at times is also a little wanting. Never the less this sequel was made 22 years after the original and released 23 years after. Is this the longest gap between a sequel? Bernard Herrmann’s signature theme is only used at the beginning for the prologue and could have been used through the film but would in all probability would have provided too much pathos and hysteria. There was a lot of wary cynicism when this went into production. For the most part, the film does some justice to Hitchcock’s film but be under no doubt this is nowhere near the standard of Hitch’s original. Australian director, Richard Franklin does add the right amount of complexity to Norman Bates’s character as well as turning Vera Miles’s straight laced Lila Loomis into the villain of the piece. Robert Bloch had written a sequel to his own book but this film deviates from Bloch’s book. There is an extra on the disc in which author Chet Williamson gushes over Bloch’s writing. The film is mostly let down by its ending that as the film reaches its bloody conclusion it also gets sillier.

The extras on the disc are plentiful and abundant. The film itself is not given a great deal of analysis and instead consists of interviews with Franklin, Perkins and Miles as well as other vintage teasers, trailers and tasters including Hitchcock’s teasers for the original Psycho. The picture quality in HD is sharp and very clear bringing out the colours well in a typically spot on transfer.