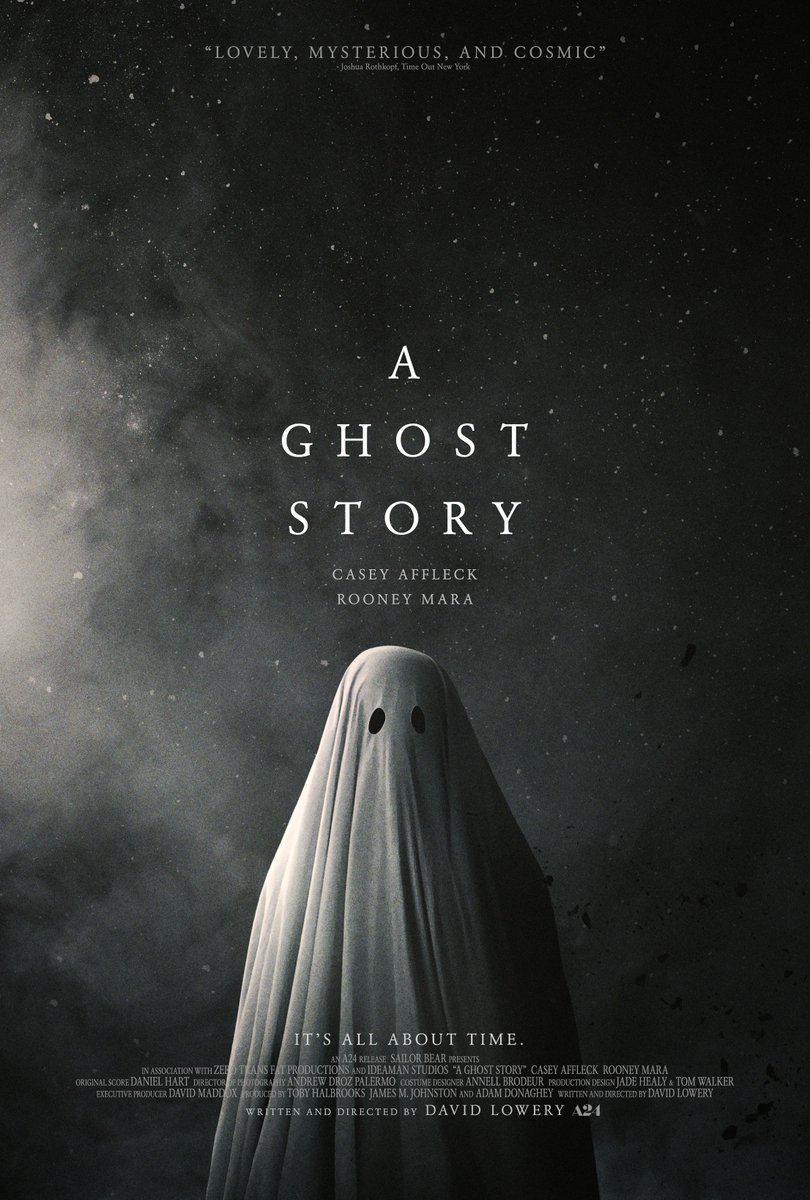 A Ghost Story is, at its heart, a film about love, loss and coping with both of these things simultaneously. Finding ways to cope with the loss of a loved one, and a loved one who is lost. You wouldn’t be amiss at thinking that director David Lowery goes down the tongue in cheek approach – this is evident off the bat by the absolute basic title – but there is a warmth to his latest feature which has been sorely missed of late.

A Ghost Story takes us through the lives, and death, of nameless characters C (Casey Affleck) and M (Rooney Mara), a young couple who, in the midst of buying a new house and trying to build a life, have the rug pulled out from underneath. C is killed in a car crash just outside their home.

Shortly after M identifies his body, we are reintroduced to C, this time covered in a bed sheet with only 2 eye holes. He remains like this for the rest of the film, as we observe him observe his mourning wife. In the somewhat traditional sense, much like how the ghost is depicted, it appears C has some unfinished business he must tend to before making it to the next plain.

The film is genuinely spooky at parts, such as when out of nowhere, the piano in the young couples small abode wakes up in the dead of night, for no reason, keys smashing to their pits. There is no reason for this, only to jolt the sleeping couple from their bed.

And while you would expect a ghost story to be creepy, this one is far more emotional than that. At 92 minutes long, it doesn’t come close to overstaying its welcome. But the film doesn’t need anything more, Lowery makes the most with time he uses.

Many shots linger for much longer than you might expect, forcing you to take in all of the frame. The house, not unlike that on the cover of an album by The Hotelier, can sit on the screen for over 10 or 15 seconds, simply forcing you to drink it in, including it’s broken driveway and cracked window frames.

With scenes like this, very little dialogue, and an Oscar winner under a bed sheet for 85% of his screen time, you can see why the word ‘pretentious’ might also be used to describe this film. But there’s so much, just underneath the surface. You have to push past the bravado to see it.

Which brings us to the much talked about “cake” scene, where a grief stricken Mara sits and eats an entire chocolate pie in one sitting, her fallen husband watching from behind his ghostly sheet. It is one of the most haunting and sorrowful scenes to grace our screen, but this is what loss can do to you. Wanting to feel something other than how you are, that you’re willing to make yourself feel sick.

That’s why A Ghost Story is important. Without saying a word, it conveys more than in a 4 minute scene than most of us dare to think about. It’s a beautiful film, immaculately shot, and as our time in the young couple’s house draws to a close, you’ll wonder what you did before you tapped inside.

A Ghost Story is released in the UK on Friday, August 11th