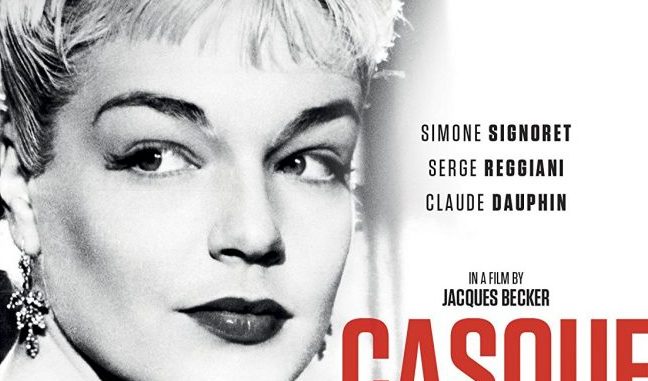 Casque d’or is the second film in chronological order that Studiocanal release in their series of four Jacques Becker films on their Vintage World Cinema sub-label. It is arguably not only Jacques Becker’s best film but is one of the great French films of all time. This may seem like a bold statement but this 1952 film is the natural progressor to the undisputable master of French cinema, Jean Renoir. This seems quite natural as Becker had worked for several years as Renoir’s assistant director. Renoir himself praised his successor on many occasions as a true artist. The links in this film are strong. Casque d’or is not only similar in style, setting and period detail to many of Renoir’s film but it also strongly references the work of the master’s father, Impressionist painter, Auguste Renoir. In the opening scene of the film we see a summer boating party arrive at an open air bar and dance hall recalling such famous Renoir paintings as ‘Luncheon of the Boating Party’ and most especially, ‘Dance at the Moulin Galette’ with the men in their boater hats and the women in their bustled dresses.

Casque d’or is set in the Belle Epoque of approximately 1898 (granted some 20 years later than Renoir’s painting were made) and is roughly based off the memoirs of a Parisian prostitute, Amélie Elie who was known as Casque d’or (golden helmet) because of her golden blonde hair and tells the tale of prostitutes and pimps and how she was at the centre of a couple of murders. This original story is seedy and Becker in his adaptation keeps the milieu but turns it into a tragic love story. The films opens with a group of friends arriving by boat at an open air bar and dance hall. A member of an Apache gang, Raymond (Raymond Bussières) invites Manda (Serge Reggiani), an old friend and reformed criminal who is now an apprentice carpenter and introduces him to his gang. He is immediately attracted to and dances with Marie (Simone Signoret), an enigmatic beautiful blonde woman. She is meanwhile dating the handsome Roland (Roland Dupuis) who is jealous and is humiliated when Manda knocks him out. Manda continues to see Marie, further enraging the jealous Roland. The boss of these gang members is Leca (Claude Dauphin) who seems to prostitute Marie out as he sees fit as her pimp (although this is never overtly stated). Leca, who fronts his criminal underworld as a wine merchant, is unhappy and thinks it’ll be bad for his criminal enterprise to have one of his gang members distracted. He instigates a knife fight duel between Manda and Roland resulting in Manda winning and killing Roland. When Marie and Manda run off together Leca plans to frame the lover.

Few films, even those of Jean Renoir have captured the Belle Epoque so well. Leading the film is Signoret who has never exuded as much sex appeal as she does in this film. She wears the costumes well, as well as her golden looped hair. She glows in every scene, where as by contrast Reggiani as the doomed lover plays his part with a brooding internalisation and what is more an economy of dialogue. Throughout Becker pays close attention to detail from the Belle Epoque posters and postcards on walls and the construction around the streets (Paris post war had still not changed a great deal from this well known period, making Paris itself iconic). Above all the costumes are accurate to the period and give an added element of great period detail.

Casque d’or was also looking ahead as well as back to Renoir’s films (and his father’s paintings) in its expressionistic use of the camera in the close-ups of the knife fight, threats of rape and its unconventional heroes. On its initials release the film was not a huge success in France but proved to be very popular in Great Britain and has since gone down as a classic.

As with the other four releases in the series it has some great extras including a brief 1973 interview with Signoret, a talk on the film by French film scholar Ginette Vincendeau and a featurette about the film that had been included on a previous release by Studiocanal, ‘At the Heart of Emotions – the Legend of Golden Marie’.