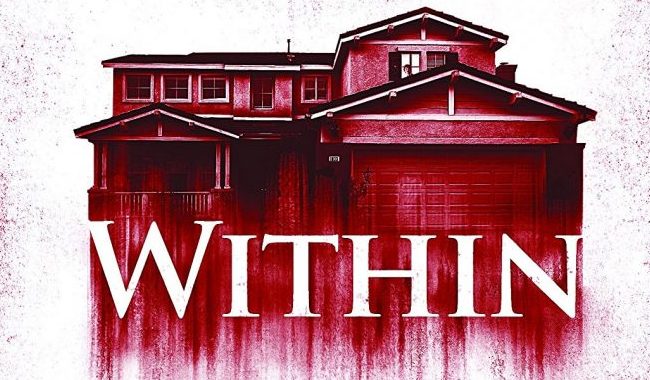 When Tobe Hooper’s Poltergeist was released in 1982 it ventured into new territory as far as the setting was concerned, in that the haunting happenings were occurring in a brand new house. (One of the stars of that older film, JoBeth Williams appears as a neighbour.) The opening shots of Phil Clayden’s Within remind the viewer of this similar locale, although this house has been standing for a few years for we discover later in the film that something terrible took place in this house some 10 years ago. A long time in American real estate.

The films is about a new family, the Alexander’s who move into the house in which the father, John (Michael Vartan) sees this as a step up for them and a fresh start since he became widowed and since re-married. John is now married to Melanie (Nadine Velazquez) and has a teenage daughter from his first marriage, Hannah (Erin Moriarty). Once they have moved in it is only Hannah who senses that something is not right about the place. She has already been grounded for hosting a house party at their previous house. We already sense some father/daughter tensions here. While they are moving in they are offered help by a seedy neighbour, Ray who helps them put in the new locks while lusting after both Melanie and Hannah. He makes the claim that he could break into their house within seconds (red herring alert). Hannah soon begins to find strange things happening from objects misplaced and strange handprints around the house. Much to the chagrin of her father she begins to heed the warnings of her neighbours and finds photographs and documents as to the strange events that led to the murder of the first occupants 10 years previously in which all the family are murdered, allegedly by the father who also hung himself. She also learns of the strange occurrences of the subsequent occupants. Without giving anything else away it would seem that Hannah’s intuition was correct and indeed there really is something or someone in the house trying to scare them away.

Made in 2014, but not released in the UK theatrically until earlier this year, Within is clearly a horror film made on the cheap and is better than its budget and limitations would suggest. Written by Gary Dauberman who was behind the successful Annabelle franchise as well as the forthcoming It based off the novel by Stephen King. On the negative side some of the performances and the dialogue particularly is below par, but between Clayden and Dauberman they are able to provide some decent scares in between a bevy of cliches. Much of the story is unoriginal, but with enough in it to keep it interesting. Vartan, perhaps best known for his role in the TV series ‘Alias’ and ‘Bates Motel’, is fairly bland, while Moriarty as the typical teenage daughter plays her part well.

Within does successfully keep its reveal at bay, we are never sure for much of the film whether the monster of the piece is something supernatural, your usual bogeyman, the neighbour or anything else unsettling. When the reveal is finally made the power of the monster is not lost and maintains its tension till the end, creating a genuine sense of claustrophobia, although at the conclusion I couldn’t help but feel that all they had to do was go out of the front door and the horror would be neutralised, unlike in say The Apparition (2012) or the superior It Follows (2014)

There are no extras other than a multi-language option.