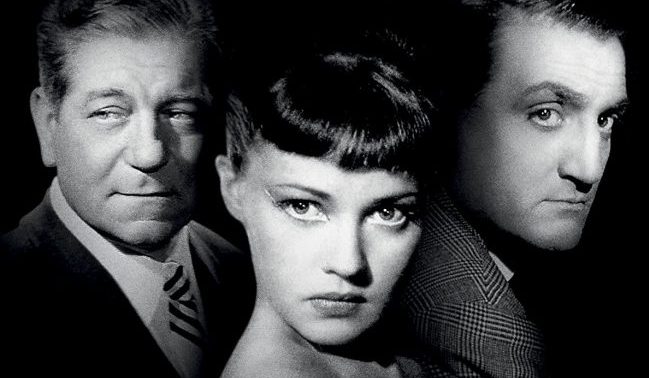 Jacques Becker was a director who played with a number of different genres. Touchez Pas au Grisbi (1954) (roughly translated as ‘don’t touch my loot’) is a crime film, or specifically a gangster film. But the action, of which there is plenty is not the thrust of the film but the relationship between two friends, ageing members of the criminal underworld who have clearly had modest success. Alone, Touchez Pas au Grisbi revived the crime film in post-war France that led to the better known Rififi (1955) and culminated in the likes of Borsalino (1970) and The Sicilian Clan (1969), but it also reignited the career of the films leading man, Jean Gabin who had been France’s biggest star in the pre-war period.

The film opens and closes with the laid back jazz harmonica score by Jean Wiener. It is played throughout as a running theme in the film and can today be easily recognised as one of the classic scores for a French film. The opening tracking shot is an almost 360° shot of the Paris streets as it pans around with Sacre Couer in Montmatre being the most recognisable building over the rooftops. The camera then pans down to the Pigalle district of northern Paris, still known as Paris’s Red Light District of stripclubs and nightclubs. This is the locale where the protagonists of the film mix, work and play. The main charater is Max (Gabin) who is dining with his friend Riton (René Dary), two criminals who have knocked around with each other for years, but are this evening celebrating the success of their recent job in Orly in which they have stolen 50 million francs of gold bullion. After the meal at their meal they go to a cabaret club (or sort of classier stripclub) where they are both dating a couple of the girls (Dora Doll and Jeanne Moreau in an early role). But Riton later confesses to Max that he has told his girl, Josy (Moreau) that he has done the job and that he and Max have the money stashed away. Max is furious at Riton, understanding that his stripper girlfriend is a fly-by-night who would easily squeal to a rival gang or even to the police. He catches Josy in an amorous position with another rival, Angelo (Lino Ventura in his first role before this Italian actor became a very popular star in France). Now Max realises that he and Riton must fence the gold and he uses  an uncle to do just this, but is ripped off even by him.

All the while Max realises that his friend has put them in danger and cost them dearly never the less one of the driving forces of the film is the lengths he will go to protect his old friend and comrade. The plot seems to be taking the term as thick as thieves literally, with the action and crime what Hitchcock would call the MacGuffin that is the plot that is a front to the real meaning of the film. As a genre film this is a gangster film as we see one tough guy against another, equalling such classics as those Hollywood Warner Brothers films with James Cagney facing off Humphrey Bogart with their icy cool behaviours. It is not in the strictest sense an average crime film or crime caper as we don’t see the crime being committed. Gabin is as cool as a cucumber with his stoney expression never faltering. He looks immaculate in his suits and always knoed exactly what to do unlike his friend Riton who pays a price for his indiscretion. The action too is equal to anything in a 1930s Hollywood gangster film with an exciting shootout in the films conclusion.

As with the other films in this selection of films by Jacques Becker released by Studiocanal there are a similar host of extra including a discussion of the film by Ginette Vincendeau who details the origins of the film from the sordid novel by Georges Simonin in which Becker softened the characters and made them more acceptable. Others include an affectionate talk by Becker’s son who remembers details of his father making the film and his impressions of Gabin, as well as a vintage interview with Moreau from 1957 in which she discusses her first time on set with Gabin, whom she described as very stern and grumpy when he first came onto the set.