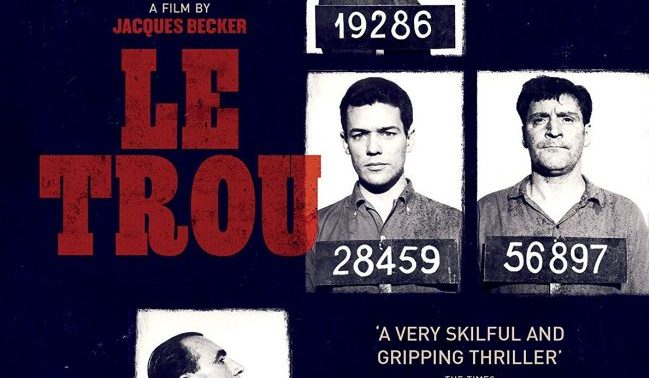 There have been so many prison related films that it is a sub-genre in their own rate. Within that there are films that focus on escape. Perhaps the best known is The Shawshank Redemption (1994) and there are elements within Jacques Becker’s Le Trou (1960) (the title translates as The Hole) that look similar. Unlike The Shawshank Redemption, based off a short story by Stephen King, Le Trou is lifted from the true story with one of the lead actor’s own escape experiences. Le Trou was also Becker’s last film in a relatively short career after making a relatively few 13 films. This is the fourth of the films by Becker released by Studiocanal.

The film opens with a car mechanic wiping grease off his hands and addressing the camera with the lines: “Hello. My friend Jacques Becker recreated a true story in all its detail. My story. It took place in 1947 at the Santé prison.” The ‘actor’ is Jean Keraudy whose only film this was. Keraudy fought in the French Resistance during World War II and it was his abilities to break in as a locksmith that landed him in prison. He was arrested and put in prison for breaking and entering after the war where he attempted to escape 10 times, succeeding 6 times. This is the only film Keraudy appeared in, and it has to be said that he is good in the film.

Following this brief introduction we are transferred to the prison with the process of admitting prisoners and the routine of the inmates. One of the inmates is young Claude Gaspard who is moved into a cell he must share with four other inmates. He is imprisoned for the attempted murder of his wife following his affair with her sister. He claims that it was an accident but is serving his sentence for attempted murder of his wife. Gaspard is played by Marc Michel, one of the few professional actors in the film, who’s only second film this is. As well as Roland (Keraudy) the other fellow cell mates are other long term lags, Jo (Michel Constantin), Manu (Philippe Leroy) and Monseigneur (Raymond Meunier). Between them they are all hatching a plot to escape by knocking through the floor and escaping through the sewage system. The question is one of trust and whether they can let Gaspard in on their plot. They decide to let him in and commence work knocking through the floor, opening hatches and eventually work their way through the sewers to the open streets of Paris.

The beauty of Becker’s film lies in the attention to detail, the process of the inmates every day lives and above all the smart process of working their way through the material to escape. This is led by Keraudy’s Roland who’s experiences and expertise in building materials, locks as well as his own experiences as a convict and escape artist drive the film forward. Nicely shot in black and white the set was recreated in the studio after cast and crew visited the real Santé prison in Paris. Most of the action takes places in the small confines of the cell and sewers that also posed difficulties in filming with the unwieldly large cameras that were used; despite its 130 minute length the film has expunged all extraneous detail. The only female appearance is that of Gaspard’s mistress who visits him in prison and is only on the screen for a couple of minutes. This is one satisfying prison drama that, even though the director was quite ill while making it it perhaps goes into the process of the breakout in more technical detail than any other film, even more than Escape From Alacatraz (1979) or The Shawshank Redemption.

Extras on the disc are plentiful, if maybe a little repetitive in places. As with all the Jacques Becker films on the Studiocanal collection there is a interview with Ginette Vincendeau and another interview with Becker’s son Jean, who had a great deal more involvement in this film than he had with his previous ones and again talks affectionately about his relationship with his father. There is also an interview with Philippe Leroy who plays Manu in this, his first film. In addition there is a contempory interview with Keraudy (included on the trailer) and a behind the scenes featurette, ‘L’Envers du décors’.