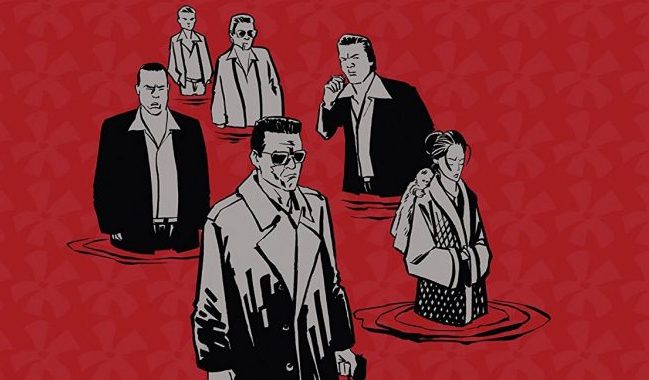 New Battles Without Honor and Humanity: The Complete Trilogy

Battles Without Honor and Humanity were a series of 5 yakuza films made between 1973-74 and produced by the Toei Company; they were sometimes subtitled as ‘The Yakuza Papers’. After this pentology of films were made Toei once again returned to the source with New Battles Without Honor and Humanity, all once again directed by yakuza film genre master, Kinji Fukasaku. The 5, plus the new trilogy makes a total of 8 films. Released on a dual format set and released by Arrow Video are the last set of films, the trilogy. Arrow Video had previously released the complete set in 2015 but retailing at about £200 this is a completists collection only.

Each of the trilogy follows a similar pattern. They are set in different cities, give the impression that they are based off real incidents and a pseudo-documentary device is employed (although there is some basis in truth in the stories they are not specifically factual), they are all directed by Fukasaku and all star Bunta Sagawara as a different character in these stand alone films. Each of them are tough and violent and filmed on the streets where they are set. The first film, simply titled New Battles Without Honor and Humanity (1974) and tells us that it is set in an urban quarter in Hiroshima. It opens in 1950 with Miyoshi Makio (Sugwara) who has made a bungled hit on a member of a rival gang boss. For this he serves 8 years in prison when the film leaps forward to 1958 and Miyoshi’s release. He feels he is owed by the Yamamori gang he works for. When released he finds himself caught in the middle of the gangland struggle between the Yamamoris and Aoshi gangs, reluctant to take sides while getting involved and falling in love with a Korean escort.

Some of the same themes are repeated in the next film, New Battles Without Honor and Humanity: The Boss’s Head (1975). This time the film is set in 1968 in Kaiyo, on the southern island of Japan. As with the first film, an initial assassination is bungled because the assassin shoots up heroin before the hit. In the ensuing struggle between the assassin and one of the Kyoei gang, Kuroda (Sugawara) kills his own boss. Never the less he serves 7 years in prison for the crime. There he befriends a fellow inmate who is released before Kuroda and with another man the pair swear their loyalalty to Kuroda. The streets are awash with heroin and prostitutes are found dead with traces of heroin and having been beaten. Kuroda is not given his dues by the old gang and forces his old boss to pay up by threatening his life and burying his wife alive. Heroin then becomes the currency.

The final film in the trilogy is New Battles Without Honor and Humanity: The Boss’s Last Days (1976). This film is set in the present day. Once again it opens with an assassination as a crime boss is killed. His adopted son, Nozaki (again played by Sugawara) is a simple labourer who vows revenge and finds himself in the middle of a violent gang war.

Throughout the 1970s the gangster or yakuza picture revitalised Toei with director Fukasaku nearly always seeming to be at the helm. These pseudo-documentary style yakuza films became known as jitsuroko (‘true record’) films and the pattern they created proved popular. After the last of the trilogy was made (of the total 8 films), 3 others were made (in 1979, 2000 and 2003), but none of them were directed by Fukasaku. An extra on the last two films of the trilogy includes recollections by Koji Takada, who had previously also written the script to Battles Without Honor and Humanity: Final Episode (1974), the last of the previous series of films.

There is another diversion from the earlier set of films and that is the more prominent role that women play in these films in which there are multiple roles, including a sympathetic role of a Korean escort in the 1st film; in the 2nd there are multiple female characters including Keiko Maji, Japan’s leading action star of the 70s who had starred in the Female Prisoner #702 and Lady Snowblood films and in the final film there is the suggestion of incest between a brother and sister. Violence is prominent in all the films, not always well represented in some of the shootouts, but never the less present. In the first film there is a great deal of racism towards women as well as verbal and physical violence towards women in all the films. At approximately 53 minutes into the first film the words are muted out so racist is it. Fukasaku’s yakuza films were very popular in the 70s and these are among the most popular of those.

Other extras on the disc include new English subtitles as they bring out the graphic language of all the films, an interesting introduction to the films by Fukasaku biographer, Sadao Yamane, teasers and trailers and an illustrated booklet.