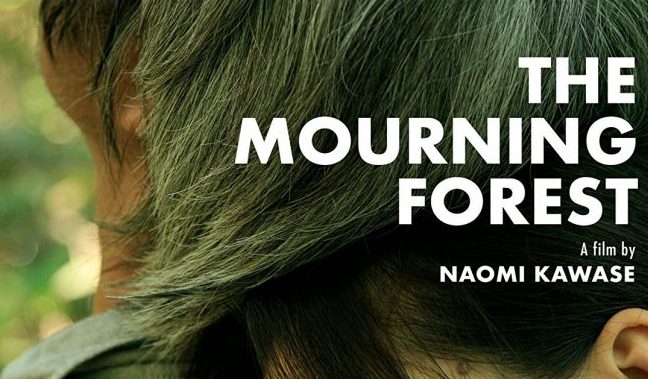 Naomi Kawase’s The Mourning Forest (2007) is a gentle film featurng a couple of gentle characters. It’s a simple story with the camera of Hidiyo Nakano gently moving over the greenery of the films natural landscape. The focus on nature is reminiscent of Terence Malick’s films as the camera lingers over wind floating over grass and trees. The story and the plot as such is very simple. Machiko, a care giver at a home for the elderly has a troubled relationship with one of the residents suffering from dementia who will occasionally violently lash out at her or attack her paintings she is doing with him. But she is persistant. One day while out for a ride their car breaks down. Machiko tries to find help but the old man disappears into the countryside. She runs after him and they decide to walk to seek help but end up becoming lost in a forest. The young Machiko and the old man with dementia bond in their search for help and find some kind of peace and solitude in their lost wilderness. Not only that but they also mourn for loved ones long since passed, his long dead wife and her dead son and end up (excuse the cliche), finding each other.

Kawase’s film is not for those who like plenty of action or dialogue, for on both counts the film is very sparse, allowing for the beautiful imagery and the emotions of the two characters to drive the narrative. The camera work that Nakano employs is often hand held, adding to the films naturalism. It can be slow going and does require plenty of patience but the emotional rewards are there with a little patience. It is a very spiritual film that is explained at the films conclusion as mogari, that is the time for mourning and “thinking back on the dearly beloved”, as well as the place for that mourning to take place. As such, without this explanation it may be lost on viewers unknowledgable of the Buddhist faith.

A Franco-Japanese co-production, it may have worked better as a shorter film to keep the viewer interested that becomes lost in its long lingering shots that improves in the second half of the film when the pair become lost in the forest. The Mourning Forest was awarded the Grand Prix prize at the 2007 Cannes Film Festival. Despite its attention to the protagonists emotions, the film is a little fuzzy as to why they broke down in the first place or why she is determined to get through to the old man. Like the journey through the forest, for those who manage to make it all the way through it has its rewards, but for those who can’t they want their time back.

Unlike other releases in Eureka’s Master of Cinema label, there are not many extras in the film other than a stills gallery and a trailer.