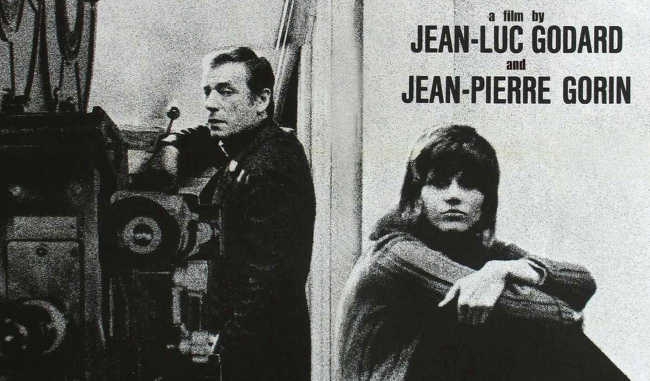 Along with Francois Truffaut, Jean-Luc Godard is of course best known as the lead filmmaker of the nouvelle vague (New Wave) that emerged in the late 1950s. By the late 1960s their directions had diverged. Godard’s films became more political in nature. Although his films had often been fairly opaque and abstract, by the late 60s (especially after May 1968) they became more political in nature with the likes of La Chinoise (1967), One+One: Sympathy for the Devil (1968) and Cinétracts (1969). The intellectual approach to his films is oft parodied. By 1972 when Godard made Tout va Bien (‘Everything is Alright’) his films had become very abstract blending documentary, proselisation with narrative cinema. He had collaborated with Jean-Pierre Gorin and this was the closest film that they had worked on together.

Released on the Arrow Academy label, Tout va Bien is Structuralist with strong Marxist tracts, a desire to express an understanding of the art of cinema and the focus on a relationship between a couple. Benefitting from Yves Montand and Jane Fonda, Godard had high hopes for this film to be widely seen and become a critical success. He was to be disappointed, however, resulting in Godard leaving Paris and set up his own production company in Grenoble. The film opens with a Union strike at a sausage factory which is witnessed by a bourgeois American journalist working for the French Bureau of the American Broadcasting System (Fonda) and her French husband (Montand), a former New Wave screenwriter and now director of commercials. The couple realise that they have a problem in their relationship when they begin to discuss the term of ‘class struggle’ and analyse their own relationship. The sausage factory itself represents the way Godard and Gorin see how films and other industries churn out their products. The second half of the film is definately stronger and includes factory workers rioting against the police in further reminiscences of May ’68. There is a lengthy scene in a supermarket at the films conclusion that ends in a riot.

This is probably Godard’s most ambitious film to date. It also had some elaborate and ambitious set pieces including a cut-away of the factory offices as though it were a doll’s house while at other times it looks like a low budget TV production. As a result there is some theatrical Brechtian alienation in the presentation of the worker’s factory and offices. As well intentioned as the film might be, it’s long tracts of dialogue and political polemics and musings on cinema are pretentious which would go a good deal of the way to explaining the films lack of success.

Elsewhere on the disc, as well as a contemporary interview with a bathrobed and unshaven Godard on the film, there is an interesting 2004 interview with Gorin about the film and his collaboration with Godard that gives context of the film. The most interesting extra that adds further context to the film is the documentary that both Godard and Gorin made. Called A Letter to Jane, it was made directly after Tout va Bien and focuses in it’s entirety on one photograph that was widely published at the time of Fonda talking with a Viet Cong soldier which left her being labelled a commie and often disparagingly called Hanoi Jane. Today, the now called Alt Right still refer to “Hanoi Jane, the traitor” when she speaks openly against the government and especially the present US President. Long, and quite dull, it is a very intellectual study of this one photo. Yet, although Tout va Bien was made 4 years after May 1968 the spirit of those heady revolutionary times in France loom very large over the film.