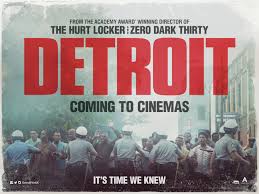 The world is fucked, lets not waste any time about it. The distain and hate that has been surrounding everything the past few years has been tough to swallow, and as great as they are, photos of cute dogs on Twitter are not enough to remove us from what is happening around us.

At times, you might feel an escape is what you need to get out of your head, to tell yourself that the likes of Charlottesville isn’t that big a deal. And if it is, it certainly won’t get to your doorstep.  Nothing like that could ever happen again.

Detroit is here to tell you that, not only is the hate real, but that it’s happened before. Many times. Detroit tells only a small part of the story of the Detroit’s 12th Street Riot in 1967. The Black people who made their way from cotton fields to prosperous cities were met with racism and trepidation, were sent to live in overcrowded high rises where poverty reigned.

In the confines of Algiers Motel, a few blocks away from the chaos, police, national guard and some army services are called to inspect the a possible gun threat, and it is from this that our story takes it’s greatest inspiration. Director Kathryn Bigelow brings us to many locations and events in the first third of the film before we eventually get to the Algiers, using her unique way of world building but also to shine a light on the shameful actions of the police force.

What the officers got away with is nothing short of shameful, but if the dramatic telling of what happens in the Algiers is even half true, then the world has been fucked for a while.

No real main characters take hold of this piece, close to 8 supporting actors who each have a seminal part to play in this story. The poster boy will be John Boyega, who garners top billing in his superb turn as the conflicted security guard; here to uphold the law with white Americans who look down their nose at him.

But if his main actor setting is simply used to draw in more of a crowd than this breath taking film should already gather, then it is a perfect turn. Boyega doesn’t even seem to have the most screen time, but what he does with it is fantastic. Other choice turns come from Algee Smith as Larry Smith, wannabe motown crooner caught in the middle of the Algiers fiasco, and Will Poulter in his striking turn as racist cop Phillip Krauss.

The story is nothing if not shocking, and you will watch this with your head in your hands. This is scarier than most horror films; all the more so because it is real, and done so well. If Detroit isn’t the best film this year, it’s easily the most important. Go see this, bring your friends, your family. Bring everyone, and learn what the world was once like. Pray we don’t go back there.