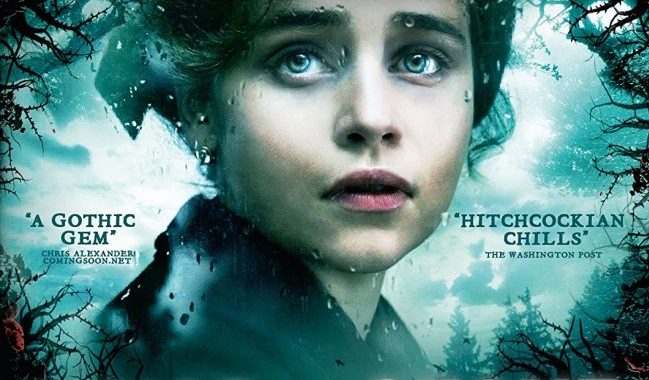 Based off a 1996 novel by Silvio Raffo and set in 1950s Tuscany, while Voice From the Stone, an American-Italian co-production is not strictly a horror film, it is very strongly gothic in tone. It has shades of Henry James’ 1898 novella, ‘The Turn of the Screw’ about it, most effectively filmed as The Innocents (1961), one of the most outstanding of all gothic horrors which starred Deborah Kerr. There is also something of ‘Jane Eyre’ present in the film, Daphne du Maurier (and Hitchcock’s) ‘Rebecca’, as well as the Venetian set gothic tale, The Lost Moment (1947) (again from a Henry James novel).

The film opens with a young boy presiding over the death bed of his mother. On her deathbed she asks her son to promise not to talk to anyone until she returns. 6 months later, Verena (Emilia Clarke), a nanny who specialises in looking after troubled or sick children is hired by the boy Jacob’s father, Klaus (Marton Csokas) to look after and cure the boy. Living in the palatial and gothicky isolated Tuscan mansion, Verena is treated with some hostility and disdain by the estate keeper and the elegant and white haired grande-dame house keeper. Verena struggles to engage with Jacob who still refuses to speak, shows unusual behaviours and even shows what could be read as suicidal tendencies. Klaus too, himself an artist, is cold and distant to Verena. He even tries to hide and run away from her. Some clues to the boy’s behaviour may rest with an abandoned quarry where Jacob spends time swimming in the water hole and that he spends hours listening in the damaged wall in his bedroom where he claims to hear voices. The young woman starts to realise in that making contact with both the boy and his father she must somehow become the dead mother.

Voice From the Stone is stylishly shot and certainly has plenty classic gothic atmosphere, aided by a suspenseful and moody score by Michael Wandmacher. Clarke, fresh from appearing in the successful ‘Game of Thrones’ is in this film the central focus character, but struggles to carry the film and at times can even irritate. Although shot in 2014, Voice From the Stone has a quite limited release, but Csokas is better cast as a somewhat moody Heathcliff-Rochester type character who for the first half of the film has little to do except be moody. All is going well, with some well set up scenes leaving the viewer unsure that what they are seeing is real or imaginary. One scene has Jacob standing on a turret that Verena sees reflected in the water of a fountain, giving the scene a frisson of strangeness. Elsewhere there are shots of Alessio, the Estate Keeper looking more like a bogeyman as leaves defy gravity and an Edgar Allan Poe like scene in which Verena is walled up in a tomb next to the boy’s dead mother who comes to life. Yes, great moments of gothicness, but a shame that these scenes are not woven into a better film. By the films conclusion the plot even becomes sillier and loses any subtelty it may have had as it moves closer to du Maurier/Hitchcock’s Rebecca (1940), as Verena tries to become the mother, Malvina.

The film is released on DVD and Blu-ray by Precision Pictures. Some nice sharp imagery works well with the rusty tones, although with any strong whites or light tones there is some pixilation. Extras on the disc include brief interviews with Clarke and Csokas and a music video by Amy Lee, used in the end titles.