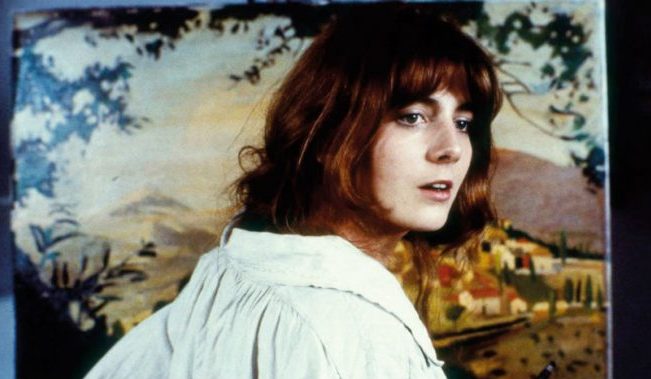 Every Picture Tells a Story: The Art Films of James Scott DVD Review

BFI have released a set of films and documentaries by filmmaker James Scott (born 1941) who, among other projects made several documentaries about modern Pop and Modern artists in the 1960s and 70s, all of which were made collaboratively between the director and the artist. Scott is the son of William Scott RA, an artist who’s work was predominantly minimalist still lifes, aesthetically similar to some of the St. Ives school of artists. The central film on the double disc collection is Every Picture Tells a Story (1984), Scott’s biopic of his father’s life from childhood through to his arrival in London and commencing at the Royal Academy of Art on Piccadilly. Although this is a straight biopic of his father it does lend the director greater authorship to the other documentaries on the discs.

Every Picture Tells a Story opens in Enniskillen in Northern Ireland, the hometown of William Scott  after which William arrives back from serving in the Great War. He arrives back and sees his son, William who was still a baby when he went off to war. The film charts the life of the family through the 1920s and his relationship with his father who was a house painter and a signwriter. Tragedy struck in 1927 when William’s father, James’s grandfather who dies falling off a ladder during a house fire. Through the 1920s young William shows an interest in art and is given an art book by his art teacher (played by a young Natasha Richardson) with plates illustrating paintings by French painter Paul Cézanne. He asks her why there are no words and she tells him that “each picture tells the story”. This begins his fascination with art and an eventual scholarship to go to the Royal Academy of Art in London in 1931, depicted through some wonderful archive footage of Piccadilly.

Every Picture Tells a Story was intended to be part of a trilogy of films Scott would make about his father, but alas this was the only one made. There is a sense that there is something cathartic about Scott telling a story about his own father. Not a great deal happens in the film, but it does give a good sense of time and place with strong attention to detail, although the scenes filmed in London were actually Glasgow, with the rusty red bricks of the Glasgow School of Art doubling for the RA. James Scott had trouble financing this film and was refused funds by the Arts Council as they claimed making a film biopic was out of their remit. Eventually funds were provided by the newly launched Channel 4 were already starting to lead the way with being more adventurous with film projects, showing more imagination it would seem than the Arts Council. Alas it still remains a little seen film.

Understanding the background to Scott’s upbringing and his own heritage gives a greater understanding of the collaborative approach he took with artists in making the 1960s documentaries, also included here. The earliest is Love’s Presentation, made in 1966 where we follow David Hockney’s process of making etchings and aquatints of his lined illustrations of a poem by C.P. Cavafy and inspired by a trip Hockney took to Lebanon. One of the illustrations is of two men sleeping in a bed. Resembling Henri de Toulouse-Lautrec’s ‘In Bed’ (1892), with a homo-erotic difference, when this 24 minute film was shot homosexuality was still illegal and therefore parts of the end of the film were excised from the original cut, now restored here. Hockney was very much part of the so-called Swinging Sixties and had appeared briefly in Ken Russell’s interesting ‘Monitor’ documentary, Pop Goes the Easel, covering the likes of Peter Blake, Pauline Boty and Derek Boshier while they were students at the Royal College of Art. Other documentaries Hockney appeared in the following years include the classic pop documentary, Tonite, Let’s All Make Love in London (1967) and was the subject of the well known, A Bigger Splash (1973)

The next film is an interview with the rarely filmed painter R.B. Kitaj from 1967. This is one of the least interesting films on the collection that, while offering some insight into Kitaj’s background is also a fairly opaque documentary that gives little insight into his work other than him name checking several artists. The same cannot be said for what it arguably the most insightful documentary here, a very collaborative 33 minute documentary covering the early career of Richard Hamilton. Hamilton (and Scott) cover some of his best known works with a commentary and analysis on the meaning of Pop Art in a modern consumerist world. His iconic collage ‘Just What Is It That Makes Today’s Homes So Different, So Appealing?’ is labelled as a study of consumerism, while the artist also looks at the fiery chrome exhausts of American cars, Marilyn Monroe as icon is given a deconstructed understanding of her as an icon (played to her song, ‘River of No Return’ over the soundtrack). Elsewhere Hamilton explains his negative painting of Bing Crosby as well as his look at the 1960s with a handcuffed Mick Jagger to gallery owner Robert Fraser following a cause-célèbres drugs bust. Interestingly most of these works are painted from photographic reproductions or use photographs rather than painted from life. This short work clearly highlights the intellectual rigour of Hamilton and his Pop Art sensibility.

As well as the title film, the other major documentary is The Great Ice Cream Robbery, an artistic and extraordinary documentary centered around American Pop Art sculptor Claes Oldenburg’s retrospective at the Tate Gallery in 1970. The film was intended to be shown on two different screens (each side are on separate discs allowing owners of the disc the opportunity to show the films side by side, assuming of course that the owner has two screens and two players that can be played next to each other). Interestingly nowhere on the discs or in the disc essays is the relationship between this split screen mentioned as resembling a diptych painting, that is a twin panelled painting or art object. Oldenburg is a scupltor known for his often witty monumental sculptures such as plugs or a giant apple or core in public spaces. Visible in this film there are his soft key typewriter, soft ladders and most interestingly of all in this documentary, Oldenburg preparing the exhibition with the unpacking of ceramic sliced ham, in which we audibly hear them clink together. This is no ordinary documentary as we witness the chance filming of the police carrying out an arrest of an illegal ice cream seller in rather comic Keystone cops fashion outside of the Tate (now Tate Britain), Oldenburg’s own 8mm filming of power stations, filming of his then girlfriend, the artist Hannah Wilke outside the Tate and some shots of very wary looking gallery warders.

The final film on the collection is the 1980, Chance, History, Art…, a meditative documentary interviewing five contemporary artists: Anne Bean, Stuart Brisley, Rita Donagh, John McKeon and Jamie Reid in which they discuss among other things Surrealism. The only time this documentary really comes to life is with the interview with Reid, in which he discusses how he was a part of The Sex Pistols with his iconic graphic collages, of course played to the Pistols’ ‘Anarchy in the UK’.

This is an interesting collection of films and it would be of great interest if BFI were to release other collections of works by Scott, including his acclaimed Nightcleaners (1975) for the Berwick Street Film Collective, a powerful document and one of his most acclaimed films about the unionization of contracted evening cleaners.