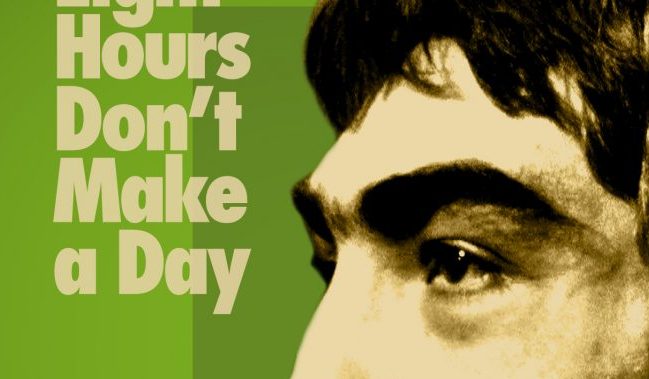 On one of the extras for Rainer Werner Fassbinder’s 5 part made for TV drama series, Eight Hours Don’t Make a Day (originally titled, Acht Stunden sind kein Tag, 1972) two contemporary critics heatedly discuss the family drama on a contemporary German TV show, arguing as to whether it is a left wing socialist drama or not. Be it his TV dramas or cinematic releases, Fassbinder was making a new kind of cinema for a (West) German audience. His dramas, along with those of his patriot Werner Herzog are considered among a new wave of German cinema, many of the films addressing the concerns and lives of blue collar workers. Few films exemplified this more than the early films of Fassbinder and in particular Eight Hours Don’t Make a Day.

Subtitled ‘A Family Series’, each episode opens with the jolly theme with shots of early morning Cologne, possibly showing the lead character’s daily journey to work: street sweepers, trams and the iconic Hohenzollern Bridge. It follows the story of a working-class family, their problems at work and their private lives. Each of the episodes, between 90 – 100 minutes long (and making up a total of 8 hours, the typical length of a working day) is titled after a couple of the characters. In the first episode, Jochen and Marion are the central characters of the drama. Jochen (Gottfried John) works as a fine precision tool maker at a factory. He lives with his parents and grandmother in their appartment and drinks with his work colleagues. One day he meets blonde wigged and sassy Marion (Hanna Schygulla) by a vending machine and begins to date her. Marion lives on her own with her 9-year-old son and has just left a bad relationship for Jochen. They soon fall in love. In the second episode the focus shifts to Jochen’s grandmother (Luise

Allrich) who begins to date a widow, Gregor (Werner Finck), a man of simple pleasures. Oma Krüger is a little eccentric and this 2nd episode follows the grandmother trying to get a flat of her own with Gregor and in the end they settle on setting up their own business running an unlicensed kindergarten in a poor part of east Cologne. As the series devlop we also follow Jochen’s beautiful sister, Monika (Renate Roland) and her abusive husband (Kurt Raab), but the focus is mostly on the devloping relationship between Jochen and Marion and Jochen’s fight with the factory bosses in balancing work pressures and increasing pressures on productivity.

Originally the series was supposed to have been 8 episodes but the series maker, TV company WDR pulled it, believing that the series was becomng too uite dark, but in all probability was more likely that it was too political. The political element is quite strong, but the workers are able to discuss and work out their problems, clash with their manager and comes to an agreement with the factory owner. The balance between work and private life is well portrayed with the 5 episodes successfully drawing the viewer in. The study of each episode has excellent character developments, whether it is the smart Marion, the perceptive but eccentric grandmother or the evil and sadistic Harald (Raab). The length allows Fassbinder to have the space for naturalistic dialogue which works and gels with the film very well. Interestingly for a European film we hear a lot of popular rock music played in bars and homes including Leonard Cohen, Neil Young and The Rolling Stones further giving the film a contemporary feel.

For many years this drama was almost impossible to see and is, therefore, very fortunate that Arrow Academy have released the print from the Rainer Werner Fassbinder Foundation and gives a much more rounded understanding of Fassbinder’s work. As it was shot on television it never the less shoots in real interiors and on location in Cologne, while there are one or two typical 1970s quirks such as the rapid reaction zoom shots. It does of course appear a little soapy in places which is natural given it’s length.

The cast is populated with Fassbinder regulars. This was the first lead role for John in a Fassbinder production, while Schygulla would appear in nearly all of his films since year one. Raab too was a regular for the German director and also appeared in a film Fassbinder had produced, Tenderness of the Wolves (1973), in which he played a homosexual cannibal. Others include most of Jochen’s fellow factory workers including in a very minor role, El Hedi ben Salem, who was not only Fassbinder’s lover, but went on to star in one of the director’s best known films, Fear Eats the Soul (1974) in which he plays a Turkish gastarbeiter in a relationship with an older woman.

This is a wonderful and, it has to be said, despite its age is compelling viewing as you follow the characters and wonder and drawn into what happens next. The political elements of the film are still a topic of discussion today and while it might not exactly be an arbeits film, it pays a good deal of attention to the work and private space of the working classes. Released by Arrow Academy, the films are presented in both Blu-ray and standard definition and as a limited edition; so definately worth purchasing while it is around. Extras on the disc include a documentary on Fassbinder, a discussion on the film by expert Tony Rayns and a wonderful German documentary on the making of the film and its nuances made in 2015.