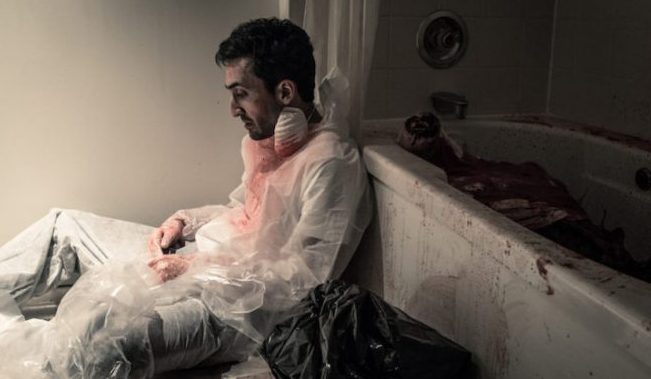 A whole new sub-set or sub-genre was born with the release of The Blair Witch Project (1999) in a type of horror film that has become known as found footage horror. Over the years there have been hundreds of similar type films, most of which are very cheaply made and straight to DVD. Once in a while there is one that is different or more interesting that comes along. The Spanish zombie film [Rec] (2007) is one such example. Another is Cloverfield (2008) that had an added element of a CGI monster and destruction of New York beyond the hand held camera aesthetic. Despite the popularity of Cloverfield many people complained of suffering from motion sickness, proving that the found footage horror worked best on the small screen rather the big screen.

A new offering, Capture Kill Release takes the film that extra mile in horror, even on its limited budget. It opens with the typical POV shots of a young married couple theorising about what they would do with a body if they kidnapped it and cut it up. For husband Farhang (Farhang Ghajar) he goes along with his wife, the annoyingly excitable Jennifer (Jennifer Fraser), who is getting way too into the project. They discuss what they would do with the body, once they’ve slaughtered it, cut the arteries in the arm and let the blood pour into the bath tub. We also see them go to a hardware story and buy an assortment of power tools to cut the body up. Still Jennifer is buzzed by it. Once they have discussed what they’ll do the couple argue about who the victim will be. They rule out children, old people, Jews or people of colour in order that their murder is not labelled as a ‘hate crime’. One day Jennifer is filming in the city looking for a suitable victim/subject. She finds in the cold winter’s morning a homeless guy, Gary (Jon Gates) whom she is talking to when she’s knocked aside by a passing man in a suit. A series of angry exchanges takes place between them. She then decides to follow him and discovers that the man has a mistress. When she discusses it with Farhang he disagrees. Jennifer finally decides to ask the affable Gary to join them for dinner. Farhang is shocked to find that she has taken this on herself. But Jennifer takes the course of events into her own hands.

It becomes clear as the film develops, as sick as these plans and thoughts are, it is only theory for Farhang. It is becoming apparent that he has doubts. Together they carry out an experiment and kidnap a cat, put it in a bin liner and drown it. Farhang protests and sees this as pointless, but the relish with which Jennifer carries out the task is disturbing. It is no accident that the real villain here is a female. In historiography women have taken the place of nurturer and therefore to place her as the most unimaginable kind of killer is shocking and disturbing in itself. The viewer hopes that she will somehow turn around and realise her horrifying acts and some self awareness. Nope, never happens. This should mark her out as one of the most evil of all killers. Part of the reason too is her outward appearance of normality with no sign of an urge despite herself, like say Norman Bates or Buffalo Bill in Silence of the Lambs (1991). Of course we also get the dawning realisation that she will not be satisfied with stopping at one victim.

Capture Kill Release is a very grungy looking and visceral film which adds to its effectiveness. Shot in Canada it is aesthetically one of the more successful found footage horror films in that it really does give the appearance of a raw VHS tape found of someone’s terrible series of acts for Jennifer becomes almost as obsessed with filming every aspect of the experimental killing from inception, planning to deed. Needless to say that it also has many precedents in real life serial killers that have planned similar acts; a similar subject was the subject of such grungy horror films as The Honeymoon Killers (1969), which it bears an interesting comparison with.

An unusual release from Eureka! extras on the disc include several trailers and some deleted scenes which on seeing it is easy why they would have been cut for the sake of the fluidity of action. Naturally shot, as is typical for this genre of horror film works much better on the small screen.