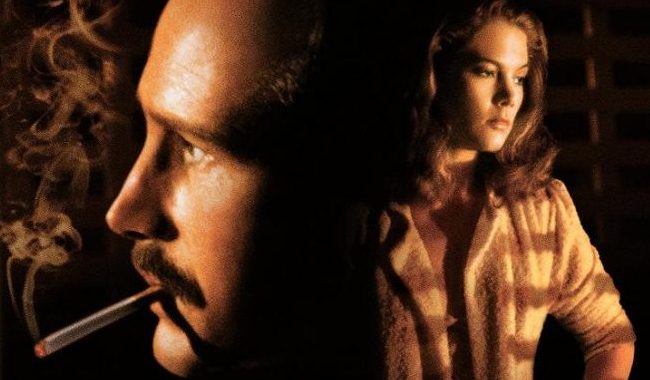 The film is set in Florida during a sweltering heat wave. A not-so-successful lawyer, Ned Racine (William Hurt) meets in a bar an enigmatic and beautiful woman, Matty Walker (Kathleen Turner) who tells Racine that she’s a married woman (But “happily” as he notes). Never the less he charms her to take him back to her place, so that he can see her ‘porch chimes’ as he puts it. They begin an affair, Racine learning that her husband (Richard Crenna) is a wealthy businessman in what appears to outsiders as a perfect marriage but is in fact loveless. Ned and Matty embark on an passionate and steamy affair, but before long she convinces him, without directly saying it that he will have to be bumped off. They plot and have already been careful that nobody knows they are having an affair (even though they are caught in flagrante by Matty’s daughter).

There are lots of firsts in this films. This was Laurence Kasdan’s first film as director. Just a couple of years before Kasdan had been introduced to George Lucas that led him to writing the screenplays for two of the biggest films of the age: The Empire Strikes Back (1980) and Raiders of the Lost Ark (1981). Lucas supported Kasdan and this led to him making Body Heat that Kasdan had written over years. This was also Turner’s first film. Previous to this she had only been in a hospital soap opera and would go on to make a career of playing femme-fatales. Her next film would be a similar kind of character, but for laughs in Steve Martin’s The Man With Two Brains (1982) or as film noir animated rabbit (!) in Who Framed Roger Rabbit (1988) or as one half of a warring couple in The War of the Roses (1989). For William Hurt he had already made two films and this was his third made in close succession. Other notable early roles include for Mickey Rourke and Ted Danson, although Danson had been acting in TV for years.

Kasdan of course makes many references and homages to Double Indemnity and other film noirs throughout, not least of all he made every effort to emulate the snappy stylised dialogue of those films from the 1940s. What Kasdan was able to do was to make the dialogue sexier and more erotic, which the old films were unable to do. Turner has the perfect sexy husky voice for the part, just like Barbara Stanwyck, Lauren Bacall or Veronica Lake, which played a big part in her casting as well as her ever-so-slightly retro look. It is not till much later in the film which actually start to see Turner’s Matty Walker is even more destructive and maniplative than Stanwyck’s Phyliss Dietrichson, while Hurt’s character is a bit more the handsome loser than Fred MacMurray’s fast talking insurance saleman. It is towards the end that the film begins to drift further away from Double Indemnity, yet the noirish shots through window blinds and sweaty bodies has a noirish look.

The music too has a noir texture to it. Not surprisingly if the music sounds cool, little surprise it’s by John Barry. Played throughout much of the music is a jazz ballard with a sultry alto sax as the main instrument. It’s also fairly eclectic in places with some of the action using a score that sounds similar to the music and atmosphere of a Bernard Herrmann score for a Hitchcock film using similar sweeps. This is a very good and well put together set of discs of a hitherto well known but often neglected neo-noir released on the Premium Collection label. Owners of these disc could not ask for a better collection of extras that includes vintage interviews with Turner and Hurt, as well as three featurettes on the making of the film including interviews with the cast and Kasdan. Superb alone as a re-evaluation.