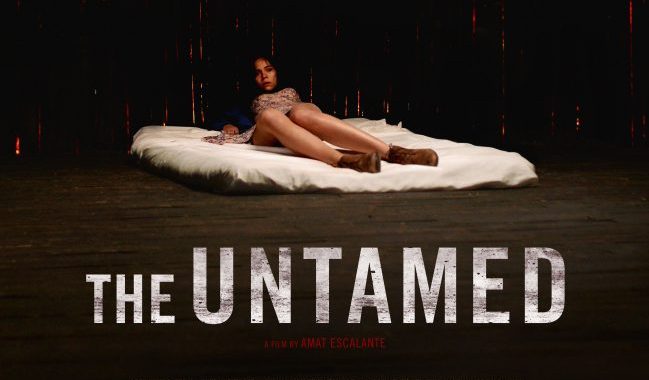 The Untamed (2016) from Mexico is an unusual film. There are aspects that is aesthetically similar  to scenes in Lars Von Trier’s Antichrist (2009), a strange and unusual film about grief, eroticism and living nature. This film opens with a woman in ecstasy. As the camera pans back we see a young woman who is possibly masturbating. As the camera pulls out further an octopus like tentacle pulls out of the woman’s vagina as she looks towards the viewer in a post-coital state. For the next 45 minutes or so the film does not venture back to what this scene means or represents. Instead we see a couple of other sex scenes early on with the real heroine of the story, Alejandra (Ruth Ramos) looking disinterested in the morning as her husband, Ángel (Jesus Meza) has sex with her. Alejandra and Ángel are a working-class couple with two young children. A short while later we see Ángel having sex with his own brother-in-law, Fabian (Eden Villavicencio). Ángel is showing all the outward signs of being homophobic and often refers to his wife’s brother as the “faggot” while he lusts after him.

One day a goat herder finds a naked body lying in shallow water. The body belongs to Fabian. He is still alive, but is in a coma and shows signs of violence and having been roughly sodomised. Alejandra begins to suspect that Ángel has been leading a double life and when she finds and looks at his phone she sees evidence o his infidelity. Resultantly Ángel is arrested. Alejandra’s friend, Veronica (Simone Bucio) introduces Alejandra to a couple who live in a rural cabin and show her a secret: an alien, tentacled creature who gives saucy pleasure to anyone it comes across. In one scene we see the crater from whence the alien had emerged from and a Noah’s Ark worth of animals all humping in the crater from cats and dogs to salamandars.

As can be determined from the synopsis, this is indeed a strange film. It never really answers the questions raised by the two plot strands, but never the less this fairly soporific sci-fi drama is an interesting film worthy of study. An element that does relate to both plot pieces is the guilt of pleasure and sexual guilt, whether it is the drama of Ángel’s guilt of his tryst with his brother-in-law, infidelity and his personal shame at his homosexual desires as well as Alejandra’s guilt of her sexual pleasure from the randy creature. On the faces of those getting shafted by the slippery tentacles there seems to be a look of guilty-pleasure, as there is on Ángel’s face as he’s rodgering Fabian.

The Untamed is not as good as director Amat Escalante’s previous film, the brilliant Heli (2013), about a school girl who mistakenly becomes involved with a ruthless gang of drug dealers. The cinematography in The Untamed is brilliant. While the score sounds similar to the ambient score of an Andrei Tarkovsky film, Escalante’s cinematographer, the Chilean Manuel Alberto Claro shoots nature beautifully and had previously shot Lars Von Trier’s end of the world drama, Melancholia (2011).

Released through Arrow Academy the film has a couple of solid extras, including his first film, the short (at little over 15 minutes) Amarrados (2002) about sexual abuse within the film. The theme of family secrets seems to be a common theme in Escalante’s work. Another extra on the disc is a feature length Making Of documentary.