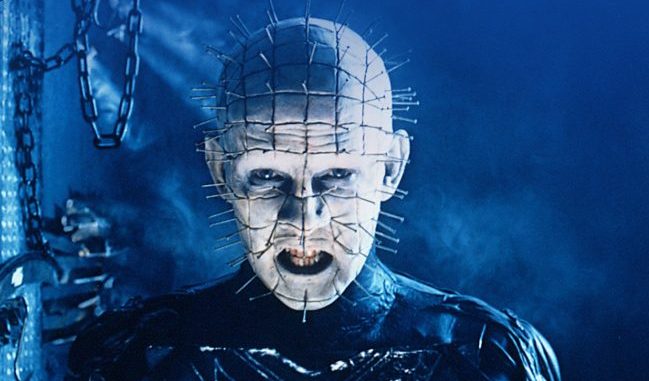 Since its release Hellraiser (1987) was an instant classic. Its popularity has never diminished while some of the demons are also iconic monsters of cinema, especially the films poster boy, ‘Pinhead’, the leader of the so-called Cenobites (although he is never referred to as Pinhead). The film is the brain child of writer Clive Barker in what was in 1987 an original horror and arguably one of the best British horror films for many years. Now the film celebrates its 30 year anniversary and looks as fresh as ever in its 2K transfer for a UK re-release.

The plot of Hellraiser is fairly straight forward and while it has some distinctly British elements reminiscent of the ‘Hammer House of Horror’ TV series, it also recalls such films as The Amityville Horror (1979) and Lucio Fulci’s gateway to hell horror, The Beyond (1980). The house in the film looks similar to those in the aforementioned films with its Dutch roof and crescent shaped attic window, though was filmed in Colindale, north west London. The plot centres on a couple who move into an old run down house that once belonged to the man when he lived there with his ex-wife. Larry (Andy Robinson, who maybe familiar to film buffs as the psychotic serial sniper in Dirty Harry, 1971) has a strained relationship with uptight and glamorous second wife, Julia (Clare Higgins). Larry’s teen daughter, Kirsty (Ashley Laurence) is wary of Julia. Julia had previously had an affair with Larry’s brother Patrick who was reported missing. There are signs Patrick had been squatting in a bedroom in the house. While they are moving in Larry cuts his hand on an exposed nail causing blood to seep through the floorboards.

The blood awakens a skeleton with some flesh hanging off in front of Julia. The form claims that he is Patrick, that he had come into possession of something resembling an Orientalist Rubics Cube that unleashed the pain of hell as his flesh was flayed off him in a place of purgatory by demons called Cenobites. It would seem that Julia, is erm, still attracted to Patrick. He demands Julia to bring back victims in order that he can be transformed into a complete human. She cruises bars to bring back victims who are hammered to death for Patrick to ‘feed’ on. When Kirsty finds out Julia and Patrick’s dirty secret she also becomes a victim of Pinhead and his Cenobites.

Made by New World, an American company best known for many a B picture including later Roger Cormon productions, this is one of the more successful transitions of a writer directing his own material (especially considering Stephen King’s awful Maximum Overdrive, 1986). Shot in a North West London suburb, most of the action takes place either within the house or a couple of other minimal locations, but little is shot outdoors, assuming this is to keep the film nationally neutral; as such the US print had the film dubbed into American English. Like many a 1980s horror film, the blood and guts is mostly made up of mostly visceral sticky stuff that looks very effective in the new 2K transfer, bringing out the colours and the sharp focus better than it’s ever been seen before. This is most effectively used in the scenes in which Julia hammers to death her businessmen victims as they stand in their Y-fronts. The design of each of the Cenobites is also imaginative and really shows some extreme S&M influences from their wounds, their clothes and tortures. The production design is also outstanding, even if the finale special-effects leave something to be desired. Never the less Hellraiser does look great and dare I say even fresh in its new transfer.