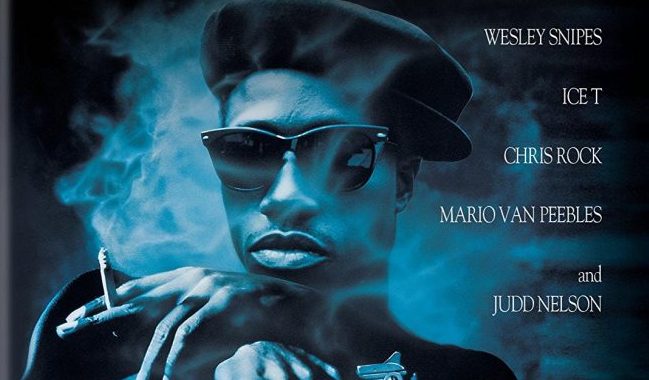 New Jack City (1991) was a new kind of gangster film. It was more than a black cast gangster film and most certainly not a Blaxploitation picture. What it did was draw in the popularity of hip hop culture for both white and black youth. Director Mario Van Peebles and the cast were all clearly influenced by the popular success and action of Brian De Palma’s Scarface (1983) and was encouraged to go on to make New Jack City by Clint Eastwood. Having said this, the style of the film by Peebles is what leads it as well as the modern, street wise dialogue by Thomas Lee Wright, but otherwise the plot is not original.

The plot driver to New Jack City is a modern Shaft like undercover cop, Scotty Appleton (Ice-T) who goes undercover to try and get evidence for a conviction against a ruthless gangster who is ruling Harlem, Nino Brown (Wesley Snipes). Brown has been ruling the streets with his ruthlessness and his crack cocaine racket that he is pushing, ruining lives on the streets of New York. The challenge for Scotty is to earn the trust of the paranoid Nino Brown who has built up and protecting his empire.

This was unbelievably Mario Van Peebles first feature after several years as an actor and having previously directed for TV, including episodes of ’21 Jump Street’ and was the son of Melvin Van Peebles who directed the classic Blaxploitation picture, Sweet Sweetback’s Baadasssss Song (1971). The flavour of the film is all about the hip hop culture running through the film. It’s hard to believe but there were many other new faces in the film, including most unbelievably Wesley Snipes who masters the scenes he is in, acting as though he was a pro with tons of experience. There is also Chris Rock acting in a serious role as a young crack addict. On an extra on the disc, Peebles says that he directed Rock as though it were a silent film, giving him direction and added the music, dialogue and soundtrack later. This was also the first movie role for Ice-T. Peebles was concerned that the young black audience would identify with Snipes’ bad guy and needed someone with a bad ass attitude who could play a cop and the auience could identify with. Ice-T had been in the rap hard rock crossover band, Body Count and had success with such songs as ‘Cop Killer’. Ice-T has street attitude and was the perfect foil to Snipes’ Nino Brown.

For many the soundtrack is important with the hip hop attitude and style running through the film and was clearly a film that a young black audience could identify with. That same year the LA set, Boyz n the Hood was also released (starring Ice-T’s contemporary, Ice Cube) which was equally hard hitting and dealt with drugs and violence on the streets. Many well known artistes such as Public Enemy also appeared in New Jack City, pushing the hip hop image of the film.

There are many excesses and over the top action and violence in the film that plays against the gritty realism of the streets. Peebles gangster film references is also strong with references to The Godfather Part II (1974) (copy cat “you were like a brother to me” scene between Nino and Gee Money, Nino’s childhood friend) and De Palma’s The Untouchables (1987) with Nino’s excessive violence mirroring Robert De Niro in that film. Extras on the disc including videos on the discs, as well as several Making Of and retrospective studies on the film. Well worth seeing again.