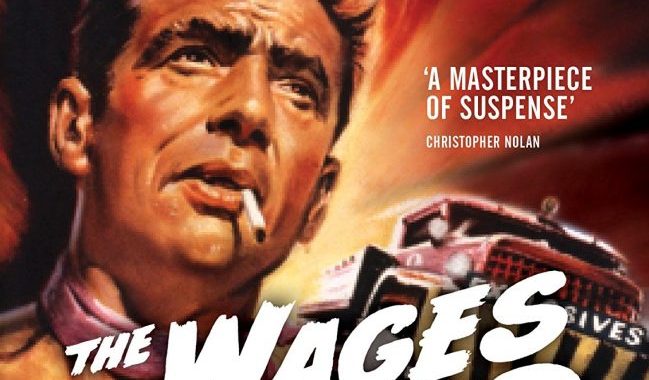 Like Alfred Hitchcock, French director Henri-Georges Clouzot is often referred to as the Master of Suspense. Indeed there are many similarities, and equally the similarities are often mistakenly overstated. Anyone familiar with the work of Clouzot will be aware of how pessimistic his work is, whereas there was a great deal of wit and black humour in the work of Hitchcock, certainly in his pre-Psycho films. That pessimism was seldom more prevalent than in The Wages of Fear (1953) (original French title: Le Salaire de la peur), a film that takes a very bleak look at human nature.

Elsewhere, The Wages of Fear has often been credited as one of the greatest action films of all time and can largely be attributed to the suspense that Clouzot builds from his camera set-ups and the style in which the film was shot. A longish film at 148 minutes, this would not appear to be the case if the first hour of the film is to be believed. The film opens provocatively with a half naked native child tormenting a couple of cockroaches. We are the then introduced to the main protagonists of the film, centrally the Corsican Frenchman Mario (Yves Montand), who mistreats the two people he is closest to, his girlfriend, local Linda (played by Clouzot’s wife, Véra Clouzot) and the Italian Luigi (Folco Lulli). They live in an unnamed village in an unnamed South American country where they work for an American oil company as workers. Adventurers, they wile away their days in ennui and are joined by a German, the blonde Bimbo (Peter Van Eyck) and another Frenchman, Jo (Charles Vanel) who hails from the same part of Paris as Mario. This bonds the two men making Luigi and Linda a little jealous.

The film changes pace and shifts up a gear with some strong suspense after an hour when the bosses at the oil company they are employed by get word of an explosion at one of their wells some 300 miles away. They need a large amount of volatile nitroglycerine to cap the wells and seek drivers to make the near suicidal journey to transport it. Mario, Jo, Bimbo and Luigi are picked for the job. They are told the slightest bump, knock, vibration or would blow them up. The challenges they face are a bumpy road, hairpin bends and potholes.

If the many extras on the new BFI release are anything to go by, this release focuses strongly on the film’s director, Clouzot. Henri-Georges Clouzot spent some time in Germany in the 1920s where he was fascinated by the Expressionistic films made there with all the shadows and imaginative camerawork. After a protracted illness it was not until the early 1940s until Clouzot made his first film, his second being the controversial Le Corbeau (1943) made while France was under German occupation where he had to follow the German authorities rules that led to criticism of him on both sides. It wasn’t until the late 1940s that he was allowed to direct again and made a handful of celebrated films including The Wages of Fear. The film that was critics associated Clouzot closest with Hitchcock though was his widely acclaimed thriller, Les Diaboliques (1955). But Clouzot’s brand of pessimism follows closest to a writer working at the same time, Jean-Paul Sartre who was writing with a sense of faithless existential nihilsm.

Unlike Hollywood films there are no happy endings in Clouzot’s film, and The Wages of Fear is no exception. The films first hour was heavily cut in the US on its release for its supposed anti-Americanism. Some of the scenes are both shocking and tense, putting the viewer in amongst the protagonists. In one scene Mario must drive through a oil filled crater, guided through by Jo. Jo becomes stuck in the mud and in his desperation to get through without becoming stuck himself runs over Jo’s legs, leaving them a crumped mess. In the accompanying booklet to the disc writer Andy Miller claims that Mario is “first determined, then ruthless and finally reckless”. Of course what is missing is that he is also greedy for this is all about getting the $2,000 cheque apiece to buy their way out of South America, or at the very least for the determination to leave South America.

The transfer of the disc looks superb on this handsome package by BFI and includes an interesting interview with the films assistant director, Michael Romanoff and several extras on Clouzot. Although remade in 1977 as Sorcerer by William Friedkin, this films remains one of the great adventure films.