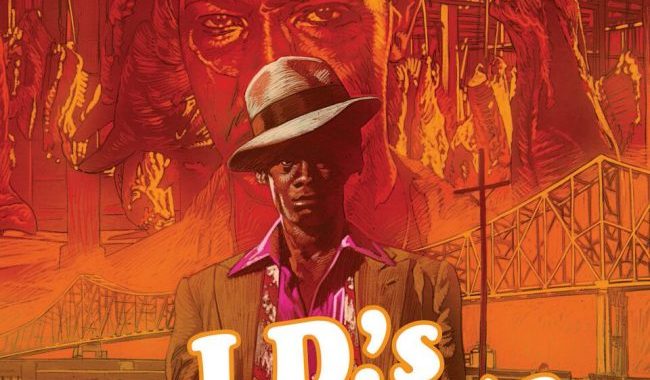 J.D.’s Revenge (1976) proports not to be a Blaxploitation film according to the films screenwriter Jaison Starkes, but all the elements for a Blaxploitation film are in place here from its characters, that it was made by AIP (American International Pictures) who made many of the films including Blacula (1972) and its overt exploitative nudity. The term or grouping Blaxploitation has negative connotations, but never the less from the early to mid 1970s there were many of these films marketed towards a black audience which gained popularity across racial lines; few were of a high quality, but they are generally good fun.

The film opens in 1942 with a confrontation in a New Orleans meat factory in which a man slashes the throat and kills a woman. The dead woman’s brother finds her body and is shot by the police believing that he is the murderer. Jump forward over 30 years and the focus shifts to a young law student, Isaac (Glynn Turman) who lives with his girlfriend in the French Quarter of the city. Out with friends one evening, Ike is volunteered to take part in a hypnosis session. Not long after Ike begins to go through a personality change. In time the spirit of J.D. Walker, the murdered man from the beginning starts taking possession of Ike, leading to some violent and nasty behaviour, even beating up and attempting to rape his girlfriend. His transformation into J.D. is almost complete – talking jive, wearing a fedora and threatening with a switchblade as the spirit of J.D., a local switchblade gangster seeks the man responsible for his death.

This film was directed by Arthur Marks, a director of little repute who made a whole bunch of cheap exploitation pictures, this being one of his better efforts. An extra on the disc is a handful of trailers of his films, including the decidedly dodgy Bonnie’s Kids (1973). Never the less as the accompanying documentary highlights there are some interesting and unconventional shots in the film making it stand out from the crowd a little. That the story is set in New Orleans is of course deliberate, a city strongly associated with voodoo and does make for an interesting location. The possession and the horror element is downplayed and is less scary than it is violent.

The 2K restoration of the film on Arrow Video is fairly decent with a couple of good extras, including a documentary called ‘The Killing Floor’ (the original title of the film) which includes interviews with actors and crew about the making of the film and also includes a superb newly commissioned artwork cover by Sean Phillips.