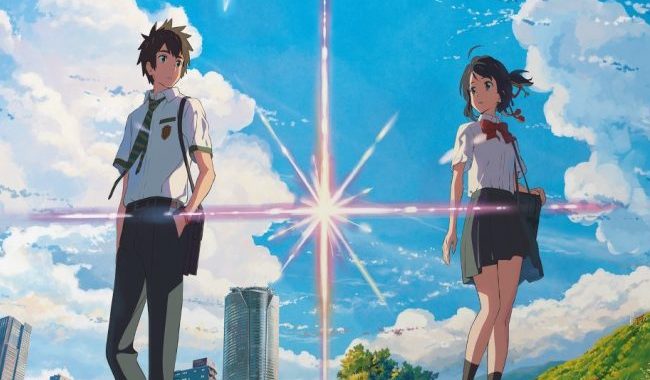 [There is a spoiler alert in this review] Your Name (2016) is the second biggest Japanese box-office hit in Japan; the biggest hit was another anime film, the hugely internationally critical anime fantasy Spirited Away (2002). The appeal of Your Name is easy to understand. The film draws in fantasy, teen romance, science-fiction and disaster movies. Many critics have questioned whether the film’s director and writer, Makoto Shinkai is the new Hayao Miyazaki, the co-founder of Studio Ghibli and director of such classics as the aforementioned Spirited Away and the all the grest Studio Ghibli films including Howl’s Moving Castle (2004) and Princess Mononoke (1997) (both of which are respectively the third and fourth best selling Japanese films of all time in their native country).

The film is a little confusing in places, but the thrust of the story opens with a teenage high school boy living in Tokyo and a similarly aged girl living in rural coastal Japan where she wishes to come back in the next life as a boy. Both wake the next day and find themselves in each other’s bodies, feeling very much like fishes out of water, both in their gender and where they live. Of course initially we are in Freaky Friday (versions filmed in 1976 and 2003) territory in which the boy, Taki wakes up to initially find he has new boobs, his fondling of them not gone unnoticed by the younger sister. Meanwhile, Mitsuha finds herself in alien territory in Tokyo, but many acknowedlge Taki’s new found sensitivity. After a while the pair find themselves waking in the other’s body a couple of times a week and are able to communicate through mobile texts. Unable to get anything other than texts from Mitsusha, Taki decides to travel to her hometown with his friends, but doesn’t know where she lives. He is told by a waitress in a cafe that where he is looking for is the small coastal town of Itomori.

From here on the film shifts wildly as we discover that Itomori was wiped out by falling meteroites from a passing comet three years previously, killing most people, including Mitusha and most of the inhabitants in the small town. Taki is distressed by this news but finds Mitusha’s saki and drinks it. He arrives back again as Mitusha on the day of the disaster and attempts to hijack a local radio station and informs them of the impending disaster, thereby saving their lives.

What is extraordinary about some of the more recent anime films is some of the effects overlaid over the more traditional cell animation. Like most animes there is some strong emotional content in this film as there is a genuine affection between the two protagonists, even though they have never met leading to a traditional romantic ending. Shinkai has employed some beautiful imagery to the film such as the stunning imagery of the fireworks display in the trail of the comet, or the sun flares as though shot with a camera and the out of focus backgrounds. Elsewhere the contrast between rural Japan and the urban environment of Tokyo’s skyscrapers, especially around the Shinjuku area of the city looks outstanding in its animation form.

Your Name has a broad appeal and its success is clear and is a very charming and imaginative film that in typical anime style takes some strange but rewarding terms, disabling the viewer to guess the films next move. Limited extras on the disc, but there is one TV feature on the film.