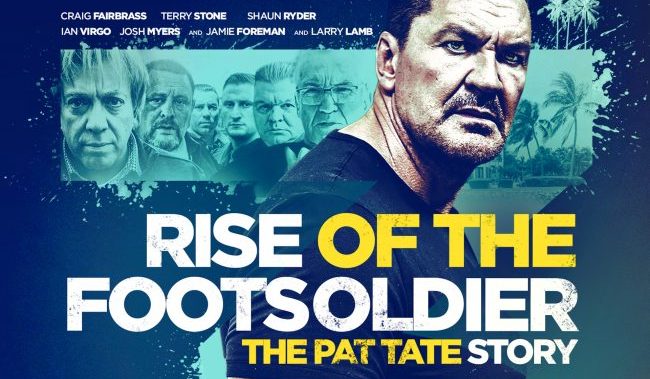 Rise of the Footsoldier 3 Review

One of the defining moments that has been mythologised both in the Hollywood gangster film and the Prohibition era was the St. Valentine’s Day Massacre. For the British gangster film the moment that has defined a myth were the Rettendon murders of three Essex based gangsters who ruled the roost in their manor with their Ecstasy drug imports from the Netherlands and the nightclubs they ran in Southend. They were found murdered in a field in a Range Rover on 6th December 1995. Since the 2000 film Essex Boys there have been a whole spate of films set around the characters of those killed: Pat Tate, Tony Tucker and Craig Rolfe. The first two Rise of the Footsoldier films (made in 2007 and 2015 respectively) focused on Carlton Leach, an associate of Messrs. Tucker and Tate who went from football hooligan to nightclub drug dealer during the rave scene. He was not killed at Rettendon. There have been at least two spin-offs and loose sequels of Essex Boys and another franchise running parralel to Rise of the Footsoldier withthe two Bonded in Blood films. But of course prior to all these there has been a strong history of tough British gangster films going right back to Brighton Rock (1947).

Rise of the Footsoldier begins by telling us through Pat Tate’s voice (played by Craig Fairbrass), informing us that “everyone knows how the story ends [but] no one knows how it began”. The story transports us back to Marbella 1988 with Pat Tate and his mate Ken (Josh Myers) becoming involved with shady underworld characters selling pills and making and make a healthy living. When things turn violent Pat and Ken go back to England where they also  involve Jimmy (Ian Virgo) and set up clubs where they end up dealing from which is the real income source. After Pat is knicked for possession and an his firm become involved in a turf war with a band of gypsies the gang buisness becomes violent. Tate has a mentor in an experienced gangster, Sam (Jamie Foreman) who gives him the correct advice in tempering his excesses. After a lay up in hospital Tate becomes closer to his new associate, Tony Tucker (Terry Stone).

Sam is then hospitalised by a couple of violent thugs who take over his business before taking over the Southend club scene. Meanwhile facing a stretch in prison, Pat beats up some coppers and goes on the run before eventually being nicked leaving a trail of beaten bodies in his trail. In prison he asserts his dominance and even makes connections for during his long stretch before he can take over again in Southend with Tony Tucker.

Of all the films made, this is the slickest so far. Since such films as Villain and Get Carter (both 1971), and even the Sweeney films the Brit gangster film has come of age. They are of course filled with ‘types’ and in this Rise of the Footsoldier 3 is peopled with these types, on steroids. The British gangster film went into a different league with Sexy Beast and became stylised with this film and the films of Guy Ritchie. However, Sexy Beast (2000) brought the C* as one of the main parts of a gangster’s lexicon and used to excess in this film. Rise of the Footsoldier 3 is also extremely violent but not without a black wit and some Essex wide-boy humour. It is also very bleak in places.

Many of the cast members, while they may seem like cliches are some good fun familar faces. It would also seem that such soaps as ‘Eastenders’ and ‘The Bill’ have become recruiting grounds for these types of films, including Fairbrass, as well as Stone (who plays Tucker) both of whom have appeared in ‘The Bill’ and ‘Eastenders’. Others include gangster film regulars Billy Murray who infamously played Don Beech in ‘The Bill’ and did a stretch in ‘Eastenders’. Foreman as gang boss Sam too had appeared for many years in ‘Eastenders’. But there are other characters familiar from outside the film and TV world who have cameos. Shaun Ryder, formerly of 90s band The Happy Mondays (their song ‘Kinky Afro’ is even played in a scene after fades out from Ryder) and Black Grape has a cameo as a bad boy in prison and comes to a sticky end. Meanwhile, the Gypsy King is played by reality TV celeb Paddy Doherty from ‘My Big Fat Gypsy Wedding’.

It goes without saying that this film is not for all tastes, but then again neither are romcoms nor horror films. Never the less for those that like these kind of films it will be an enjoyable ride. Fairbrass as Pat Tate carries the film having, along with Stone and Roland Manookian as Rolfe all of who have appeared as support in the previous films but are brought to the foreground here with their larger than life characters, especially Fairbrass. Is there room for a 4th film, probably not, but I am sure that there maybe yet another spin-off. Either way it only adds to the folk hero mythology as the Krays had done to a previous generation. In a word who cares if the film is devoid of too many facts if its makes for great entertainment.