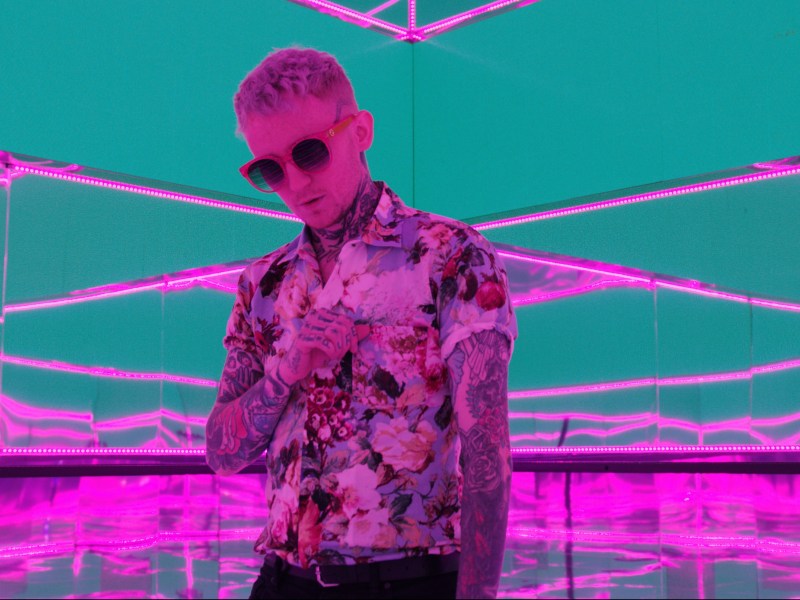 Following a string of must-see live performances at some of the UK’s biggest festivals, this summer including Glastonbury and Reading & Leeds, Frank Carter & The Rattlesnakes today share new single “Spray Paint Love”. The track premiered as Annie Mac’s ‘Hottest Record’ on Radio 1 show and comes accompanied by a neon-soaked video directed by Ross Cairns (Snake Eyes) and shot inside Samsung’s innovative Hypercube, with Frank taking centre stage, illuminated in a myriad of projected and mirrored imagery. It is a feast for the senses and a vivid accompaniment to the swaggering blues of the track.

In Frank’s own words of the single – “Spray Paint Love was written in the early hours of the morning in the back lounge of a tour bus driving through the east coast of the United States of America. Mesmerised by the neon streets and glowing skies and the rolling landscape of unending road that we were constantly rolling along.
It’s an obituary of a love song, and a reminder to live in the Now… because it’s all we have.”

So far, 2017 has belonged to The Rattlesnakes. There’s the top 10 album, “Modern Ruin”, which shot to number 7 in the charts upon release in January, the Radio 1 playlists for the singles to date, and of course their sold out shows which have grown in intensity and scale as the year has gone on.

Now the band round off a triumphant year with their fast approaching December dates, which see them bring their trademark intensity and raucous stage presence to some of the biggest Academy venues in the country. If you think the (literal) pyrotechnics at the stage show at Koko were spectacular, just wait till you see them tackle the likes of Brixton Academy. It’s a vast venue to be sure, but if this year has proved anything, it’s that the world is theirs for the taking.