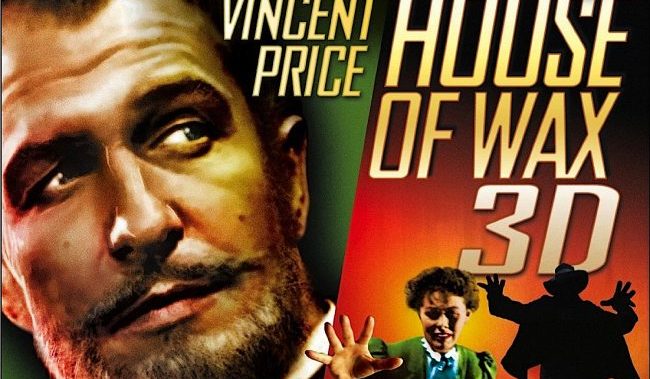 Nothing to do with the 2005 film starring Paris Hilton, House of Wax (1953) is one of the best horror films made in Hollywood in the 1950s. That might be a bold statement but in the 1950s fantasy cinema was dominated by science-fiction; the majority of horror films made were either B movies or B movies that starred Vincent Price. As one commentator puts it on a good Behind the Scenes featurette extra, there were those films Price made before House of Wax and those he made after where he became the new star of horror features. Yet this film was also the first feature shot by a major Hollywood studio in 3D and kick started a short lived craze or gimmick that has become popular again in recent years (the independent Bwana Devil had been made the year before in 3D).

Released by Warner Home Video in their Premium Collection series on dual format the relese can also be seen in 3D (for 3D TVs of course) and an accompanying documentary traces the history of the film and about the use of the 3D process. Of course Hollywood was facing something of a crisis in the 1950s with McCartyism and, most threateningly the advent and rise in the popularity of television meaning audiences began staying at home leaving the Hollywood studios to become more inventive in inticing audiences off their back sides and back to the cinema. House of Wax seemed suitable material to be the first major 3D film with the use of wax sculptures, Technicolor and its gothic horror subject matter. The 3D is used to good effect in the film as any opportunity to fly objects towards the screen is utilised, including a middle section with a fairground barker bouncing elasticated balls on a bat towards the audience.

But the origins of House of Wax was that it was a remake of a previous Warner Brothers film, The Mystery of the Wax Museum made in 1933. In the early 1930s the gothic horror film was very popular and nearly all of course were made in black and white, apart from a couple of films which were made in a two colour Technicolor process at Warner Brothers. The first was Doctor X (1932) starring British actor Lionel Atwill and Fay Wray (yes, the scream queen of King Kong, 1933). The success of this grand guignol schlocker for Warner Brothers led to a follow-up, The Mystery of the Wax Museum the following year. Of course this film is a little hammy with the female journalist character (Glenda Farrell) adding some irritating if sassy humour to the film. It was also surprisingly shocking with its suggestion of necrophilia and body horror. It is superb and a real bonus to have The Mystery of the Wax Museum as an extra on the discs.

House of Wax took the plot of the former film and as well as much of the dialogue. However, the script was tightened up and the focus on a journalist was completely removed. It was also designed to set the film in 1890s New York, giving it that grand guignol look. Never the less the plot remained essentially the same. It opens with a prologue with Henry Jarrod (Vincent Price) lording over his ‘children’, his beloved waxworks he has lovingly sculpted. Jarrod falls out with his business partner who wants to make the museum into more of a Chamber of Horrors which Jarrod refuses. His partner then decides to burn the wax musum down to claim the insurance. In the ensuing struggle between Jarrod and his partner, Jarrod is left for dead as his wax museum burns around him. This is aparticularly impressive scene in which the 3D and Technicolor is really vivid as we see the wax sculptures melt like human flesh and the eyes popping out of their sockets from the melting figures.

Jump forward a few years to the early 20th century and Jarrod had survived the horror of his beloved wax museum burning down and is preparing for the opening of a new wax museum. Now though he is partially crippled in a wheelchair, his hands damaged and is supposedly relying on an assistant to do his work to his exact instructions. When he meets Sue (Phyllis Kirk) he immediately sees her as his next creation as Marie Antoinette, but first targets her ditzy flatmate, Cathy (an unusally and not necessarily successfully cast Carolyn Jones who became better known as Morticia Addams) who is murdered and her body disappears. Jarrod’s tormentor, the man who led to his injuries is also murdered with the death made to look like a suicide (which is re-enacted in the wax museum). When Sue attends the opening she begins to suspect that the likeness of the Joan of Arc waxwork is way too much like the real thing and the resemblance to Cathy is uncanny. It is then that Sue becomes stalked by a badly distorted faced assailant in a cloak and fedora.

Vincent Price’s career can be split into two halves: the pre-House of Wax period and his career after this film in which he went from being a character actor to a lead actor in horror films. His gothic brand of camp charm and the sinister was given full reign here. The female performers are relatively bland and inconsequential, with even Carolyn Jones, who’s career was beginning to take off at this point is killed off fairly early on and she does seem miscast here. One noteworthy support actor is Charles Bronson (going under the name of Charles Buchinsky here) who as the stocky mute and square faced mute manservant to Price’s Jarrod. He is good here in an early role for his career and not least of all menacing.

There are many reasons for this horror film being a key one, and appropriate therefore it should be given such good packaging with a great Behind the Scenes documentary that includes interviews with Martin Scorsese, archive interviews with Price about the role, director Andre de Toth and Price’s daughter, Victoria among others.