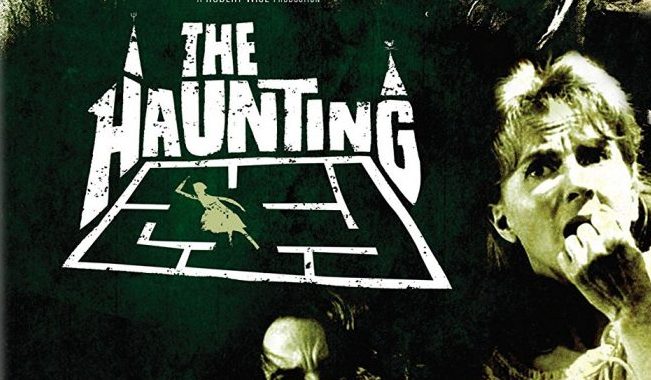 The Haunting (1963) is a great example to how the future of the horror film can be. Yet, unlike many a haunted house film there are no terrifying faces, no sudden jumps nor a ‘bus’ – the false jump scare preluding the real scare. Alfred Hitchcock’s Psycho (1960) was a game changer and re-wrote the rule book of the horror film. But another film released in Britain the following year, The Innocents, based off the Henry James’ novel ‘Turn of the Screw’ was another film that was very different in style to anything that came before it. The Innocents relied on the projected imagination of it’s main character to bring ghostly terrors to life. The other film worthy of note and followed in the steps of The Innocents was Robert Wise’s The Haunting (1963), that again relied on the projecteed terrors and neurosis of the film’s main character.

The opening prologue of The Haunting effectively sets the scene and in many ways is the template for many of the more recent haunted house films of the 1970s up to today and has a genuinly creepy feel to it. The film opens with Dr. John Markway (Richard Johnson) narrating the history of the house and the family that lived there since the house was built, we are told 90 years ago (1870s). The house had always been owned by the Crane family and opens with the death of the first owner’s wife whose carriage crashed, killing her. Crane re-married, but she too dies, falling down a staircase. Their daughter barely ever moved out of bed, dying in the nurery an old woman, but not before her nanny hangs herself from the spiral staircase in the library. That the house is haunted is the source of much fascination for Markway, a researcher on the paranormal. Markway secures a lease to rent the house for the purposes of his research into the paranormal. He shares the experience with three other strangers: Theo (Claire Bloom), someone who claims to have ESP, a sceptic (Russ Tamblyn) and a sensitive and meek young spinster, Eleanor (Julie Harris) who claims to have experienced poltergeists as a child. From the start Eleanor is edgy and showing signs of nerves. These are tested the first night when Theo and Eleanor are awoken by some loud banging and scraping at the door. As well as sensing cold areas around the house (including at the door of the nursery) the group hear other sounds including moaning and the sound of a crying child. The hauntings grow in intensity and theaten to send them, Eleanor in particular over the edge.

The horror in The Haunting lies in the imagination, both in a literal and a visual sense. The film’s director, Robert Wise had a good grounding in his early career having directed a couple of Val Lewton’s atmospheric films of the 1940s (Curse of the Cat People, 1944 and The Body Snathcher, 1945) and with him also brought some of the atmosphere of The Uninvited (1944) and previous to this was the editor for Orson Welles’ Citizen Kane (1941). This way of scaring audiences and ghost story horror films were unusual before this film and even for several years after, both in Hollywood and the UK, but did gain traction in European cinema in the 1960s. Lighting, sound and use of the camera (DoP was Davis Boulton) was the driver behind the films use of terror. One of the most effective moments of terror in the film is the scene where Eleanor has been awoken by the sound of a child crying and muffled voices from behind wall moulding (in which the floral pattern of the moulding looks like a face). Eleanor thinks she is holding Theo’s hand only to wake and see that there is no one next to her.

Part of the intelligence of this film lies in the character of Eleanor. Like Deborah Kerr’s governess to the creepy children in The Innocents, Eleanor is a sexually repressed and neurotic spinster, albeit young. There is some ambiguity as to whether much of what is happening is in Eleanor’s imagination as we hear her inner voice talking about, no matter what she is experiencing wants to stay at Hill House and never leave. The original source novel, ‘The Haunting of Hill House’ was written by Shirley Jackson and it can be easily read that much of Eleanor’s character is in fact Jackson, herself an acute agrophobic like Eleanor.

This film looks good on this dual Premium Collection release that, unlike other recent re-releases in the series doesn’t include many extras other than extensive commentaries by Wise, screenwriter Nelson Gidding and the four main protagonists in the film and also includes a fold-out poster of the film.