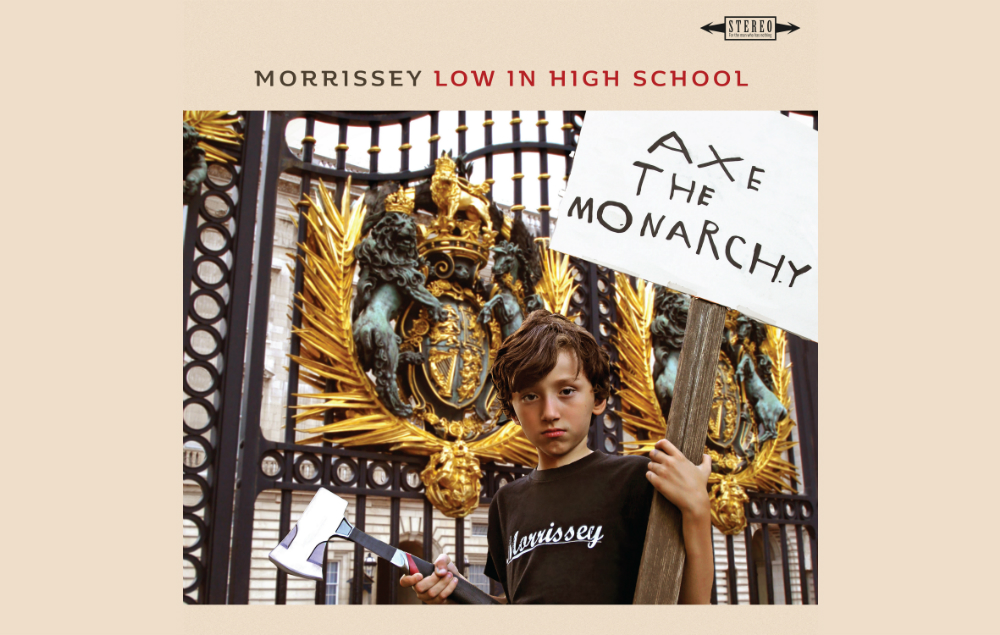 8/10 – ‘To hell with everybody else, everybody else!’ Morrissey proclaims on ‘I Wish You Lonely’, an early standout on his 11th solo record ‘Low In High School’.

The romp and stomp of that particular track and the sentiment of those fine lines almost seem like a reward to those of us able to shrug at certain old and ongoing controversies. For those mature enough to place Morrissey’s own opinions and political affiliations aside from their own, ’Low in High School’ is rich with rewards.
It opens in spectacular mode with what sounds like elephant cries before bursting into the thunderous and thrusting ‘My Love I’d Do Anything For You’, the rockiest song here, and one which may confuse some into thinking they were getting an upgrade on 2009’s ‘Years of Refusal’ album.

It’s anything but. What follows is an eclectic mix of musical genres mixed with lyrics which go between the fictional, personal and political, often together in one track.
‘Spend more on nuclear war if that’s your chosen illusion’ he advises on the surprisingly upbeat and unbearably light ‘All The Young People Must Fall In Love’.
Then there’s the synth-base driven ‘Jacky’s Only Happy When She’s Up On The Stage’, the a tale of an insecure actress dealing with ‘the effects of sexual neglect’ and in the end, the harsh truth that ‘everybody’s heading for the exit’. ‘Spent The Day In Bed’ seems to improve on each listen and is further proof that Morrissey is still capable of penning a proper pop song.

When he gets it wrong, we get tracks like ‘I Bury The Living’, a song about the casualties of war which should be applauded for its ambition but forgotten for its naive lyrics and messy music, which towards the end reveals itself as two songs disguised as one.
Despite that, ’Low In High School’ contains many a Morrissey ‘classic’; the most obvious and instantly recognisable of which is ‘Home Is A Question Mark’. It’s a song broken from the same mould as ‘Jack The Ripper’ and ‘Now My Heart Is Full’ and contains all the key elements to make it a ballad destined to be sung, crooned and fawned upon at many a live gig to come.

‘In Your Lap’ comes with layer upon layer of delicate pianos played under a despondent narrator who is ‘so tired of counting the days’. In stark contrast ‘The Girl From Tel Aviv Who Wouldn’t Kneel’ may in fact be inspired from a play about a Holocaust victim, however is presented like something from BBC’s Strictly Come Dancing – it may inspire you to take your loved one by the waist and perform the tango across the living room.
But it’s the records final tune which draws the most attention, and given its themes, will probably get it. ’Israel’ is an apocalyptic piano ballad and love letter to much discussed Jewish state – a song which musically and lyrically achieves heights Mozza has rarely achieved. Lines like ‘The sky is dark for many others, they want it dark for you as well’, and ‘They bitch and whine because they are not like you’ are sure to upset the usual crowd. Ho hum. To hell with everybody else.