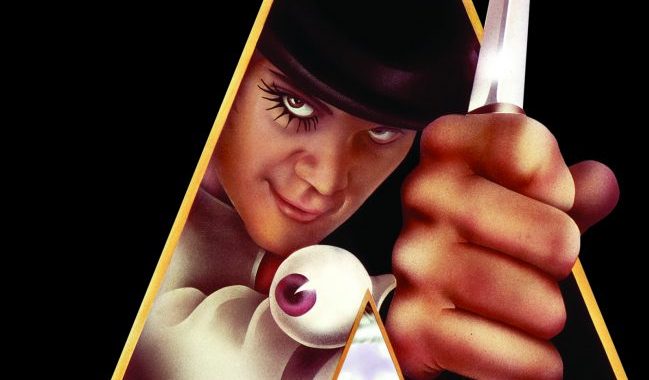 One of the most controversial, original and iconic films in cinema was from a director who changed genres whichever he turned to. He re-wrote the rules for the war movie, the horror genre, science-fiction and historical costumer. Yet, A Clockwork Orange (1971) was more indefinable as genre cinema. Some have seen it as Kubrick’s response to the type of reactionary youth cinema that appeared in the counter-culture with the likes of Easy Rider (1969). Of course, in the UK at any rate the controversy surrounding A Clockwork Orange followed Kubrick right up to his death in 2000. So strong was reaction to the films violence that his detractors stated that the film encouraged copy-cat violence leading to death threats sent to the American who by the late 1960s permanently settled in the UK. Fearing for his family Kubrick himself banned the film from being shown in the UK, a ban that remained in place until after his death.

The version released as the latest in the Warner Premium Collection dual format releases once again sees the series of documentaries originally on a 40th anniversary edition from 2011. As before the image is sharp and pristine and for those who have not seen the recent transfers will see the film in a whole new light, with the violence in sharp focus even more than ever before with McDowell’s Alex turning on his fellow Droogs as he knocks them all (in slow motion) into a lake.

Made on a low budget for Kubrick this did present Kubrick with many challenges but the director overcame much of this with shooting on such dystopian looking locations as Thamesmead new town or a Wandsworth underpass. Of course based off Anthony Burgess’s 1962 novel, the book (and the film) created a new language in this dark dystopian vision of a near future. Kubrick remained faithful to the novel while Kubrick created a look for the film that was both very much of its age and of a future world in which society seems to be very fractured. The look of the Droogs is typical of that: white boiler suits, DM boots, bowler hats and canes and, for Alex, false eyelashes over the right hand side.

The film opens with Alex’s (Malcolm McDowell) famous narrated monologue introducing himself as the “faithful narrator” as he introduces his Droogs as they prepare for a night of the “old ultra-violence”. From the get-go Kubrick controversially allows us be sympathetic to the violent asocial Alex as we are made aware of his love of Beethoven’s music. After beating up a wino in an underpass, Alex and his gang go to the Moloko Bar where they drink ‘milk plus’, drug laced milk and decide to go out for some “ultra-violence”. In a strange back projection they speed in a sports car, a crazy faced Alex and his Droogs come upon the house of a writer and his wife (Patrick Magee and Adrienne Corri). They talk their way in and proceed to trash the house, brutally raping the wife and beat the writer (as Alex cheerfully sings ‘Singin’ in the Rain’. You’ll never hear this song the same way again). This scene was seen as particularly shocking and is one of the key scenes of the film, but as far as the filmmakers were concerned, it was supposed to be shocking.

Later Alex enjoys sexual liaisons, lives a lazy life in the high rise he lives in with his parents and is visited by his eccentric and sadistically camp probation officer, Mr. Deltoid (in a very mannered and camp performance by Aubrey Morris). But he turns on his fellow Droogs who in turn also set-up Alex. When they attack the home of a woman known as Catwoman (Miriam Karlin), Alex attacks the woman with an art piece phallus and kills her. He is sentanced to 14 years in prison and passes his time keeping his nose clean. He hears of a treatment called the Ludovico Treatment that could offer him the opportunity for early parole if he undertakes the treatment. He is selected and finds the treatment in which he is given drugs, forced to keep his eyes open and is subjected to repeated violent imagery. This has the effect that Alex feels nauseus and sick at any suggestion of violence or sex. Released back into society this proves more difficult than he thought.

The dual format release is laced with many interesting extras, many of which are led by McDowell himself who clearly had the greatest of respect for the director (although he was sad that Kubrick never spoke to him again after the film was finished) and proud of his legacy for the film as is clear as he presents some of the extras here. It became the film that defined both their careers. McDowell says he never auditioned for the role, but the director wanted him after seeing him in his first film, If…. (1968). A very worthy release and one for any collector of cult cinema or cinema lovers even if it is difficult viewing for some even today as both Kubrick and McDowell made a thoroughly despicable character who rapes and commits violence into a sympathetic one.