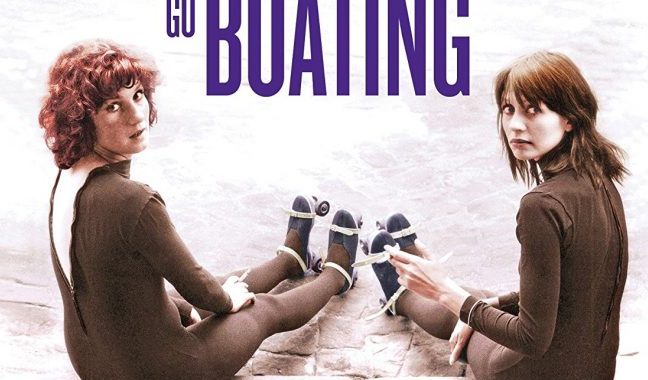 Previously released by BFI on DVD, Céline and Julie Go Boating (1974) is now released by the studio on Blu-ray and is one of the classic French films of the 1970s, yet one that is far from being the most accesible of films. Indeed, it is a very cerebral film that requires some attention and at over 3 hours this may prove a challenge to many. It is the key film of director Jacques Rivette whose earlier films were even more inaccesible and challenging at over 4 hours long apiece and relying more on ad lib acting. Never the less when Céline and Julie Go Boating was released to much acclaim. He never tried to be accesible or be accepted by the mainstream, but rather his films want to challenge the actors and the viewer. He is himself a cinephile.

Most of his films are equally either long or visually challenging and one of his later films, La Belle Noiseuse (1991) was also critically acclaimed and is must viewing for anyone interested in this director’s oeuvre. Céline and Julie Go Boating opens with the chance meeting between Julie (Dominque Labourier), a librarian who is bored and looking for fresh adventure in life who becomes fascinated by the quirky Céline (Juliet Berto) in a quiet Montmatre square. At the time Julie is reading a book on spells and magic and creating rune shapes with her foot in the sand. Céline is eccentrically addressed and Julie, curious decides to follow her. The two strike up a friendship and (we are never really made sure) a relationship. Céline is eccentric and, so it happens is an amateur magician. This is the first clue that maybe Céline is a figment of Julie’s imagination, conjured up if you like. Independently, both women venture into an abandoned house in the neighbourhood that eventually conjures up a drawing room scene from the 1940s in which both Céline and Julie are observers before finally becoming involved. Like the sweets Lewis Carroll’s Alice eats to change size, so Céline and Julie suck on a sweet to be transported to the soap opera they witness between the players in the house. In time the two characters merge into one and they both become quite similar to each other and each alternate as the housemaid. This story within a story starts to take on the appearance of an obscure Henry James ghost story.

Another aspect of Rivette’s style is the apparent ad-libbing of the film. Often this is overstated and apart from a lunch scene the story is written, but it was written off the cuff and as the film was being filmed with contributions from the cast. Shot in 16mm the film does have a guerilla style of filmmaking and has often, perhaps correctly written as a feminist drama. It is definately a female buddy movie. However, it is less Thelma and Louise and more like Vera Chytilová’s Daisies (1966), a film made just before the Prague Spring that is not often referenced as being an influence. But the dreamlike and quirky style of Céline and Julie is similar, with the almost revolutionary journey of the two women. A film that was quite openely influenced by Céline and Julie is surprisingly Susan Seidelman’s Desperately Seeking Susan (1985) that is quite consciously referenced as an influence by Seidelman herself (also mentioned in the accompanying booklet to the film and on a visual essay extra as told by Jonathan Romney).

Filmed in the 18th arrondissement of Montmatre, despite it not portraying the picture postcard image of the Paris area, the film does have a great 70s look with the clothes, hairstyles and even post-hippie feminist sensibility of the characters. Never the less the direction the film takes is a little disconcerting in places, leaving the viewer uncertain as to where the film is going, yet at the same time, despite its disjointedness is a very nuanced film. There is some great context given in Romney’s essay in the sleeve book and as a disc extra that adds some interesting interpretations and a better appreciation of the film. The other essays in the booklet are all contemporary reviews and interviews, with the interviews with the two lead actors being of particular interst as they speak of their respect for Rivette. It’s one of those classics of French cinema that you know you should watch, but can be a hard slog and rewarding in equal measure.