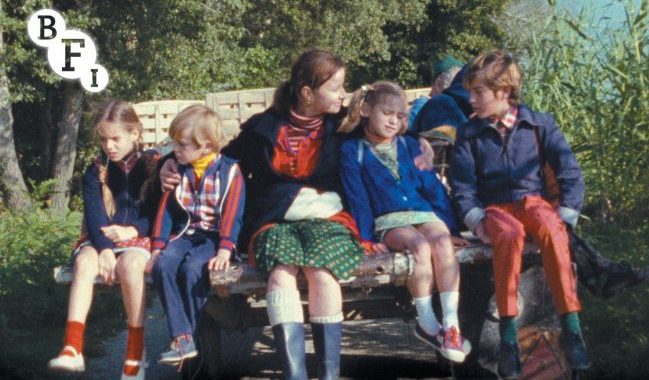 Despite its title, Will it Snow for Christmas? (1996) (original French title: Y’aura t’il de la neige à Noël?) is far removed from having anything Christmassy about it until the final scene. What it is, is a strong social drama of the Ken Loach ilk, highlighting the harshness of life on one particular French farm. Nor is this film a picture postcard travelogue of its Provençal setting. Nor is it sentimental. So what is the film? Will it Snow for Christmas? was the first feature for director Sandrine Veysset who, as she stated on an extra on the disc was direct with the producer and pretty much just said, “so are you going to give me the money?” She was pleasantly surprised when he unflinchingly said yes. However, Veysset also said that there was nothing autobiographical about this film, even though she was brought up on a farm and the film is set in the period when she was a child and dedicated the film to her mother. It is also set in the region where she was brought up. Even if this is not autobiographical, it is very hard to believe that she did not bring her own memories and experiences to the film.

The film begins during one Summer season on a farm in the Vaucluse region in Provençe. It can be assumed looking at the cars and clothes the film is set in the 1970s, although we are never explicitly made aware of the time period. Working hard in the fields picking vegetables with other seasonal workers is a mother of seven children (Dominique Reymond). Varying in ages from young teenagers to the youngest, a baby, the family work through the long days in the fields. The farmer (Danial Duval) works the family hard. He has been in a long term relationship with the woman and is the father to all the children, but does not live with her but in a neighbouring farm house.

As the narrative develops we move from the Summer months to the Autumn. While the sequences filmed of the Summer months may not be altogether buccolic but instead hard work, it is far from being depressing. Filmed with of course all the bright light of the Provençal countryside once it moves into the Autumn months the light is overcast and the colours are more mooted. Although it has been evident that the father is a harsh task master who sees both his girlfriend and children as slave labour on his farm. For most of the film his character is not so black and white as he talks of how much he misses the children when they are not around and seduces the mother, probably for his own satisfaction. But when the plot moves into the Winter months he becomes more aggressive in his behaviour and we can see how the mother no longer wants anything more to do with him and falls into a state of depression as a victim of abuse.

The mother is not, as the film reaches its conclusion the victim of physical abuse but is clearly the victim of emotional abuse. Of course the easy reaction to this is to ask why does she not just walk away? This is a common response by those who have not faced this, but equally it is the behaviour of the children that is interesting. Through their eyes they all have a very close relationship to their mother but one of a mixture of fear or disciplined respect for the father; there is some innocent views of life and the world through the eyes of the children that thankfully is devoid of sentiment. However, once there is a suggestion that the father has abused the eldest daughter the narrative takes on a sinister overtone. Never the less the drastic steps that the mother makes at the end perhaps seems something of a surprise, other than say the incremental steps that led to the tragic end of the brilliant Belgian film, Our Children (2012).

This is an interesting release from BFI with extras on the disc including an interview with one of the few professional actors, Dominique Reymond who plays the mother and interviews with director Veysset and her cinematographer, Hélène Louvart.