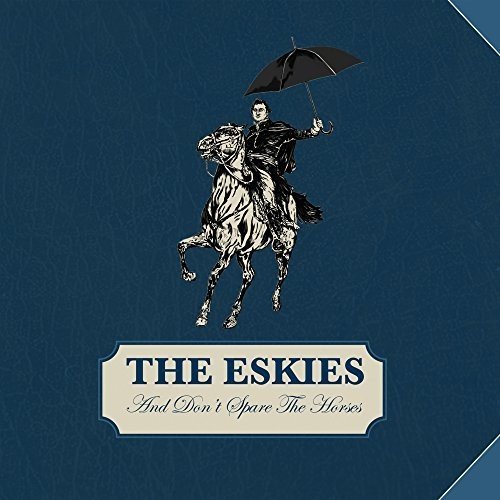 The Eskies – And Don’t Spare The Horses

To call The Eskies a folk group is to undersell the dynamic and varied musical stylings of the Dublin five piece band. There is certainly a folk core to their songs, but the dramatic and exuberant stories they tell are set to a backing that includes elements of rock, blues and swing, plus sprinklings of gypsy folk, sea shanties and brass band melodies too.

And Don’t Spare The Horses is the band’s second album, following the critically acclaimed 2015 debut After The Sherry Went Round. The last two years have seen The Eskies tour in ten different countries, play mainstage slots at both Glastonbury (Field Of Avalon) and Cambridge Folk Festival, and also achieve a good deal of radio and tv play.

The Eskies have a big sound. Their work has abundant energy, with strong vocals and bold instrumental backing across all of the varied tracks. Guitar and mandolin complement brass melodies and their anthemic choruses give an uplifting singalong feel. The album’s opening track, and also its lead single, All Good Men sets the tone from the off with its massive sound and manic tempo. The Man Who Ran also has a rousing tone, a track that just demand audience participation with shouted vocals and fists pumped.

There are also several theatrical sounding tracks that immediately evoke clear visual images. Hail Hail, a dark tale of lost love, and the ultra-fast Napoleon are both well written songs delivered with real commitment. Two other tracks stand out as both excellent and a little different. Death To The Sentry comes closest to a mainstream folk song and the harmony vocals are quite outstanding, while Building Up The Walls tells of a relationship gone bad over excellent brass melodies.

The Eskies have built a fine reputation as a live band and it is immediately obvious that many of these songs are going to be a great deal of fun when played live. They take a traditional sound and add many layers of melody to create a frenzied fusion of musical energy and passion. This may not be one for fans of old school folk music, but those whose taste runs more to the chaotic delights of The Pogues are going to love it.