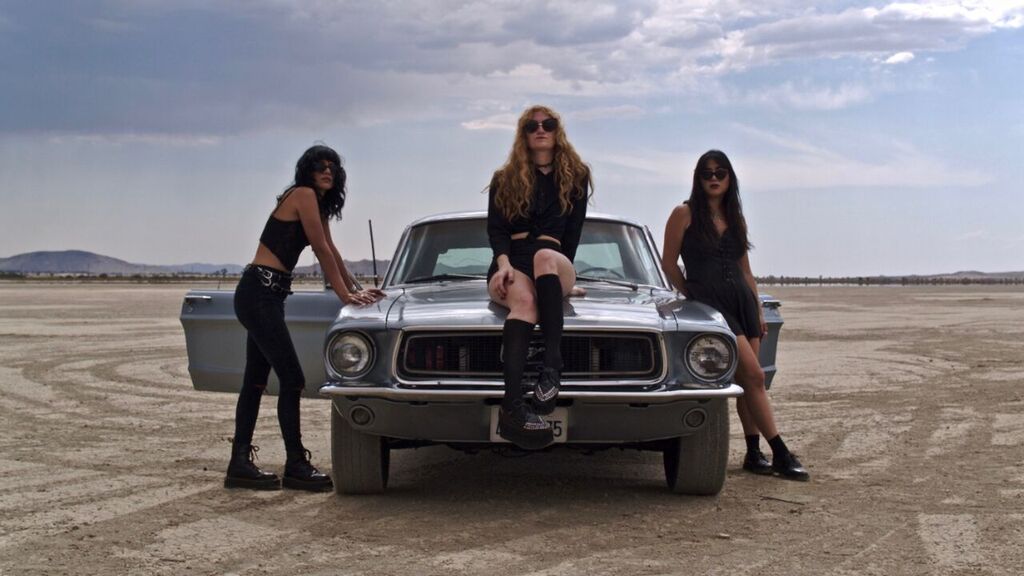 After releasing their debut self-titled album earlier this year via Suicide Squeeze Records, Californian trio L.A. Witch are sharing a new video today for the album standout track “Drive Your Car”. The band have also announced a European tour next March including a run of UK dates.

Shot in the Californian desert, the “Drive Your Car” video matches the grunge-soaked, reverb-heavy, post-punk sounds of L.A. Witch wonderfully. Director Allie Lane explains, “With the “Drive Your Car” video, I wanted to evoke a surreal state of adventure that matches the romantic lulls and highs of a road trip. L.A. Witch’s psych rock swells and enigmatic lyrics called for bleached colour tones, mirror mirages and expansive desert landscapes.”

In the dimly lit interior of a small nightclub, where the stale smell of a thousand extinguished cigarettes drowns out the smell of spilt beer and broken dreams, a band plays against a backdrop of cheap golden tinsel. Outside, palm trees line the night’s horizon. In the years to come, the streets will swell into highways and interstates, but for now, Los Angeles is still a young city growing daily with transplants from across the United States, all looking for a new life. It’s still a city largely cut off from the rest of the country, and in the years before the Manson family forever tarnishes the infinite hope of the Western enclave and before the Hell’s Angels of Altamont interrupt rock n’ roll’s peaceful trajectory with unprecedented violence, there is still a dreamy California sound for those dark rooms suffused with neon light. The three women of L.A. Witch wouldn’t be born for several decades, but their sound transports you back to those warm Californian nights in smoky rooms.

The name is a partial misnomer. Though the band hails from Los Angeles, they do not partake in any sort of witchcraft. Yet their ability to conjure a specific time and place through their sound does suggest a kind of magic. On their eponymous debut album, L.A. Witch’s reverb-drenched guitar jangle and sultry vocals conjure the analogue sound of a collector’s prized 45 from some short-lived footnote cult band. The melodies forgo the bubblegum pop for a druggy haze that straddles the line between seedy glory and ominous balladry; the production can’t afford Phil Spector’s wall-of-sound, but the instruments’ simple beauty provides an economic grace that renders studio trickery unnecessary; the lyrics seem more descendent of Johnny Cash’s first-person morality tales than the vacuous empty gestures of pre-fab pop bands. This isn’t music for the masses; it’s music for miscreants, burnouts, down-and-out dreamers, and obsessive historians.